Will Doctor Who ever rematerialise? 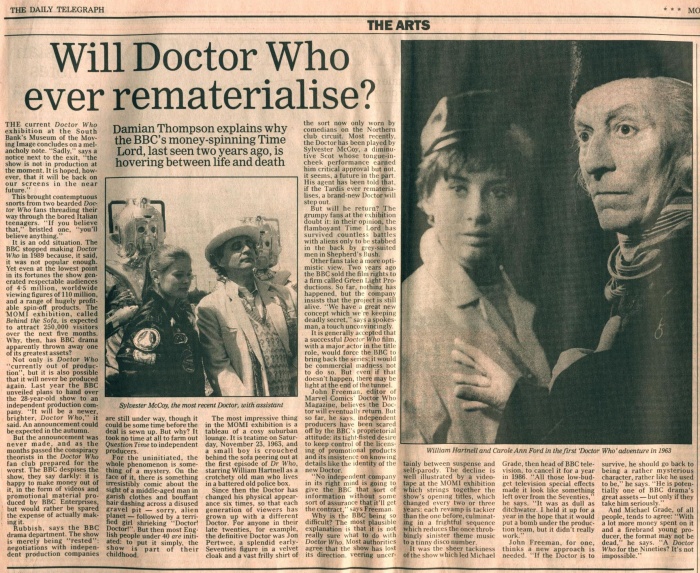 Damian Thompson explains why the BBC's money-spinning Time Lord, last seen two years ago, is hovering between life and death

THE current Doctor Who exhibition at the South Bank's Museum of the Moving Image concludes on a melancholy note. "Sadly," says a notice next to the exit, "the show is not in production at the moment. It is hoped, however, that it will be back on our screens in the near future."

This brought contemptuous snorts from two bearded Doctor Who fans threading their way through the bored Italian teenagers. "If you believe that," bristled one, "you'll believe anything."

It is an odd situation. The BBC stopped making Doctor Who in 1989 because, it said, it was not popular enough. Yet even at the lowest point in its fortunes the show generated respectable audiences of 4.5 million, worldwide viewing figures of 110 million, and a range of hugely profitable spin-off products. The MOMI exhibition, called Behind the Sofa, is expected to attract 250,000 visitors over the next five months. Why, then, has BBC drama apparently thrown away one of its greatest assets?

Not only is Doctor Who "currently out of production", but it is also possible that it will never be produced again. Last year the BBC unveiled plans to hand over the 28-year-old show to an independent production company. "It will be a newer, brighter, Doctor Who," it said. An announcement could be expected in the autumn.

But the announcement was never made, and as the months passed the conspiracy theorists in the Doctor Who fan club prepared for the worst. The BBC despises the show, they say darkly: it is happy to make money out of it, in the form of videos and promotional material produced by BBC Enterprises, but would rather be spared the expense of actually making it.

Rubbish, says the BBC drama department. The show is merely being "rested": negotiations with independent production companies are still under way, though it could be some time before the deal is sewn up. But why? It took no time at all to farm out Question Time to independent producers.

For the uninitiated, the whole phenomenon is something of a mystery. On the face of it, there is something irresistibly comic about the sight of a middle-aged man in garish clothes and bouffant hair dashing across a disused gravel pit — sorry, alien planet — followed by a terrified girl shrieking "Doctor! Doctor!". But then most English people under 40 are initiated: to put it simply, the show is part of their childhood.

The most impressive thing in the MOMI exhibition is a tableau of a cosy suburban lounge. It is teatime on Saturday, November 23, 1963, and a small boy is crouched behind the sofa peering out at the first episode of Dr Who, starring William Hartnell as a crotchety old man who lives in a battered old police box.

Since then the Doctor has changed his physical appearance six times, so that each generation of viewers has grown up with a different Doctor. For anyone in their late twenties, for example, the definitive Doctor was Jon Pertwee, a splendid early-Seventies figure in a velvet cloak and a vast frilly shirt of the sort now only worn by comedians on the Northern club circuit. Most recently, the Doctor has been played by Sylvester McCoy, a diminutive Scot whose tongue-in-cheek performance earned him critical approval but not. it seems, a future in the part. His agent has been told that, if the Tardis ever rematerialises, a brand-new Doctor will step out.

But will he return? The grumpy fans at the exhibition doubt it: in their opinion, the flamboyant Time lord has survived countless battles with aliens only to be stabbed in the back by grey-suited men in Shepherd's Bush.

Other fans take a more optimistic view. Two years ago the BBC sold the film rights to a firm called Green Light Productions. So far, nothing has happened, but the company insists that the project is still alive. "We have a great new concept which we're keeping deadly secret," says a spokesman, a touch unconvincingly.

It is generally accepted that a successful Doctor Who film, with a major actor in the title role, would force the BBC to bring back the series; it would be commercial madness not to do so. But even if that doesn't happen, there may be light at the end of the tunnel.

John Freeman, editor of Marvel Comics' Doctor Who Magazine, believes the Doctor will eventually return. But so far, he says, independent producers have been scared off by the BBC's proprietorial attitude: its tight-fisted desire to keep control of the licensing of promotional products and its insistence on knowing details like the identity of the new Doctor.

"No independent company in its right mind is going to give the BBC that sort of information without some sort of assurance that it'll get the contract," says Freeman.

Why is the BBC being so difficult? The most plausible explanation is that it is not really sure what to do with Doctor Who. Most authorities agree that the show has lost its direction, veering uncertainly between suspense and self-parody. The decline is well illustrated by a videotape at the MOMI exhibition which strings together the show's opening titles, which changed every two or three years: each revamp is tackier than the one before, culminating in a frightful sequence which reduces the once throbbingly sinister theme music to a tinny disco number.

It was the sheer tackiness of the show which led Michael Grade, then head of BBC television, to cancel it for a year in 1986. "All those low-budget television special effects made it look like something left over from the Seventies," he says. "It was as dull as ditchwater. I held it up for a year in the hope that it would put a bomb under the production team, but it didn't really work."

John Freeman, for one, thinks a new approach is needed. "If the Doctor is to survive, he should go back to being a rather mysterious character, rather like he used to be," he says. "He is potentially one of BBC drama's great assets — but only if they take him seriously."

And Michael Grade, of all people, tends to agree: "With a lot more money spent on it and a firebrand young producer, the format may not be dead," he says. "A Doctor Who for the Nineties? It's not impossible."

Caption: Sylvester McCoy, the most recent Doctor, with assistant

Caption: William Hartnell and Carole Ann Ford in the first 'Doctor Who' adventure in 1963