William Hartnell — the actor with 1,000 faces 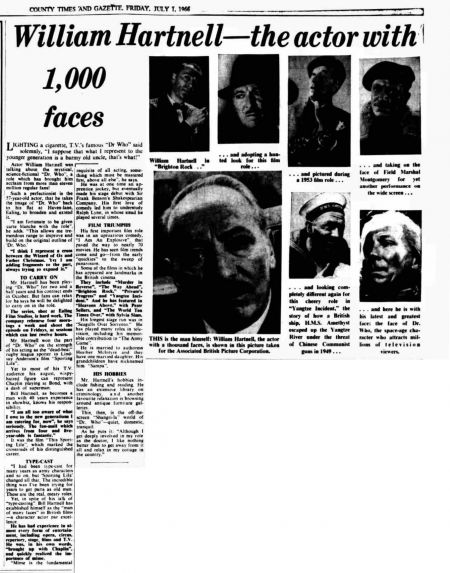 LIGHTING a cigarette, T.V.'s famous "Dr Who" said solemnly. "I suppose that what I represent to the younger generation is a barmy old uncle, that's what!"

Actor William Hartnell was talking about the mystical, science-fictional "Dr. Who", a role which has brought him acclaim from more than eleven million regular fans!

Such perfectionist in the 57-year-old actor, that he takes the image of "Dr. Who" back to his hat at Haven-lane, Ealing, to broaden and extend it.

"I am fortunate to be given carte blanche with the role", he adds. "This allows me tremendous range to improve and build on the original outline of "Dr. Who."

"I think I represent cross between the Wizard of Oz and Father Christmas. Yet I am adding fragments to the part, always trying to expand it."

Mr. Hartnell has been playing "Dr. Who" for two and a half years and his contract ends in October. But fans can relax for he says he will be delighted to carry on in the role.

The series, shot at Ealing Film Studios, is hard work. The company rehearse four mornings week and shoot the episode on Fridays, a sessions which can last twelve hours.

Mr. Hartnell won the part on the strength of his acting as the dead-beat" rugby league spotter in Lindsay Anderson's film "Sporting Life". Yet to most of his T.V. audience his august, wispy- haired figure can represent Mr. Chaplin playing at Bond, with a dash of superman.

Bill Hartnell, as becomes a man with 40 years experience in showbiz, knows his responsibility.

"I am all too aware of what I owe to the new generations I am catering for, now", he says seriously. The fan-mail which arrives from four and five-year-olds is fantastic."

It was the film "This Sporting Life", which marked the crossroads of his distinguished career.

"I had been typecast for many years as army characters and so on, but "Sporting Life" changed all that. The incredible thing was I've been trying for years to get parts as old men. These are the real, meaty roles.

Yet, in spite of his talk of "type-casting". Bill Hartnell has established himself as the man of many faces in British films - a character actor par excellence.

He has had experience in almost every form of entertainment, including opera, circus, repertory, stage, films and T.V. He was, in his own words, "brought up with Chaplin", and quickly realized the importance of mime.

"Mime is the fundamental

requisite of all acting. something which must be mastered first, above all else", he says.

He was at one time an apprentice jockey, but eventually made his stage debut with Sir Frank Bensons Shakespearian Company. His first love of comedy led him to understudy Ralph Lynn, in whose stead he played several times.

His first important film role was in an uproarious comedy, "I Am An Explosive", that paved the way to nearly 70 movies. He has seen film trends come and go from the early "quickies to the sweep of panavision.

Some of the films in which he has appeared are landmarks in the British cinema.

They include "Murder in Reverse", "The Way Ahead". "Brighton Rock." "Private's Progress and Yangtze Incident." And he has featured in "Heavens Above," with Peter Sellers, and The World Tea Times Over." with Sylvia Sims.

His longest stage run was in "Seagulls Over Sorrento." He has played many roles in tele. vision, including his memorable contribution to "The Army Game".

He is married to authoress Heather McIntyre and they have one married daughter. His grandchildren have nicknamed him "Sampa".

Mr. Hartnell's hobbies include fishing and reading. He has an extensive library on criminology, and another favourite relaxation is browsing around antique furniture galleries

This, then, is the off-the-screen Shangri-la world of "Dr. Who-quiet, domestic, tranquil.

As he puts it: "Although get deeply involved in my role as the doctor, I like nothing better than to get away from it all and relax in my cottage in the country."

... and taking on the face of Field Marshal Montgomery for yet another performance on the wide screen...

... and looking completely different again for this cheery role in "Yangtze Incident." the story of how a British ship. H.M.S. Amethyst escaped up the Yangtze River under the threat of Chinese Communist guns in 1949...

... and here he is with his latest and greatest face: the face of Dr. Who, the space-age character who attracts millions of television

THIS is the man himself: William Hartnell, the actor with a thousand faces, is shown in this picture taken for the Associated British Picture Corporation.