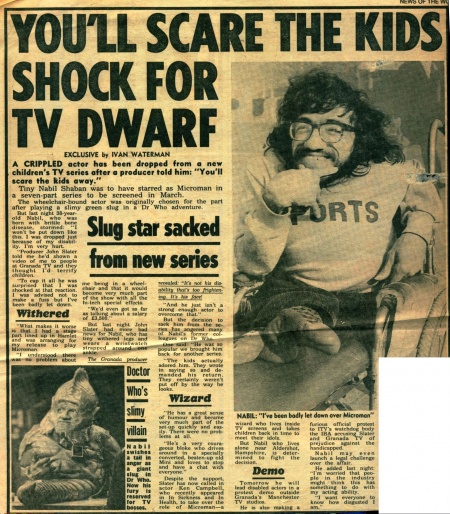 A CRIPPLED actor has been dropped from a new children's TV series after a producer told him: "You'll scare the kids away."

Tiny Nabil Shaban was to have starred as Microman in a seven-part series to be screened in March.

The wheelchair-bound actor was originally chosen for the part after playing a slimy green slug in a Dr Who adventure.

But last night 38-year-old Nabil, who was born with brittle bone disease, stormed: "I won't be put down like this. I was dropped just because of my disability. I'm very hurt.

"Producer John Slater told me he'd shown a video of me to people at Granada TV and they thought I'd terrify children.

"To cap it all he was surprised that I was shocked at that reaction. I was advised not to make a fuss but I've been badly let down.

"What makes it worse is that I had a stage part lined up in Hamlet and was arranging for my release to play Microman.

"I understood there was no problem about me being in a wheelchair and that it would become very much part of the show with all the hi-tech special effects.

But last night John Slater had more bad news for Nabil, who has tiny withered legs and wears a wristwatch strapped aroun4..one ankle.

The Granada producer revealed: "It's not his disability that's too frightening. It's his face!

"And he just isn't a strong enough actor to overcome that."

But the decision to sack him from the series has angered many of Nabil's former colleagues on Dr Who.

One said: "He was so popular we brought him back for another series.

"The kids actually adored him. They wrote in saying so and demanded his return. They certainly weren't put off by the way he looks.

"He has a great sense of humour and became very much part of the set-up quickly and easily. There were no problems at all.

"He's a very courageous bloke who drives around in a specially converted, beaten-up old Mini and loves to stop and have a chat with everyone."

Despite the support, Slater has now called in actor Ken Campbell, who recently appeared in In Sickness and In Health, to take over the role of Microman—a wizard who lives inside TV screens and takes children back in time to meet their idols.

But Nabil who lives alone near Aldershot, Hampshire, is determined to fight the decision.

Tomorrow he will lead disabled actors in a protest demo outside Granada's Manchester TV studios.

He is also making a furious official protest to ITV's watchdog body the IBA accusing Slater and Granada TV of prejudice against the handicapped.

Nabil may even launch a legal challenge over the affair.

He added last night: "I'm worried that people in the industry might think this has something to do with my acting ability.

"I want everyone to know how disgusted I am."

Caption: Doctor Who's slimy villain. Nabil swishes a tail in anger as a giant slug in Dr Who. Now his fury is reserved for TV bosses.

Caption: NABIL: "I've been badly let down over Microman"