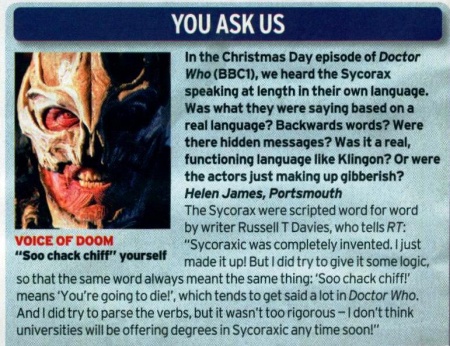 In the Christmas Day episode of Doctor Who (BBC1), we heard the Sycorax speaking at length in their own language. Was what they were saying based on a real language? Backwards words? Were there hidden messages? Was it a real, functioning language like Klingon? Or were the actors just making up gibberish?

The Sycorax were scripted word for word by writer Russell T Davies, who tells RT: "Sycoraxic was completely invented. just made it up! But I did try to give it some logic,

so that the same word always meant the same thing: 'Soo chack chiff!' means 'You're going to die!', which tends to get said a lot in Doctor Who. And I did try to parse the verbs, but it wasn't too rigorous - I don't think universities will be offering degrees in Sycoraxic any time soon!"