You should know about ... Doctor Who 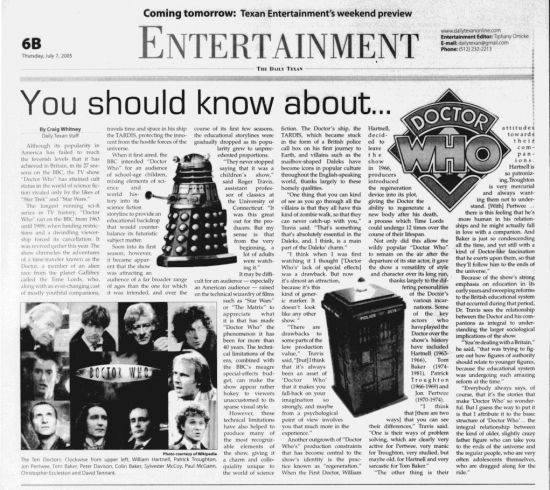 Although its popularity in America has failed to reach the feverish levels that it has achieved in Britain, in its 27 seasons on the BBC, the TV show "Doctor Who has attained cult status in the world of science fiction rivaled only by the likes of "Star Trek" and "Star Wars."

The longest running sci-fi series in TV history, "Doctor Who ran on the BBC from 1963 until 1989, when funding restrictions and a dwindling viewership forced its cancellation. It was revived gather this year. The show chronicles the adventures of a time-traveler known as the Doctor, a member of an alien race from the planet Gallifrey called the Time Lords, who, along with an ever-changing cast of mostly youthful companions, travels time and space in his ship the TARDIS, protecting the innocent from the hostile forces of the universe.

When it first aired, the BBC intended "Doctor Who for an audience of school-age children, mixing elements of science and world history into its science fiction storyline to provide an educational backdrop that would counterbalance its futuristic subject matter.

Soon into its first season, however, it became apparent that the show was attracting an audience of a far broader range of ages than the one for which it was intended, and over the course of its first few seasons, the educational storylines were gradually dropped as its popularity grew to unprecedented proportions.

"They never stopped saying that it was a children's show," said Roger Travis, assistant professor of classics at the University of Connecticut. "It was this great out for the producers. But my sense is that from the very beginning, a lot of adults were watching it."

It may be difficult for an audience — especially an American audience — raised on the technical wizardry of films such as "Star Wars" or "The Matrix" to appreciate what it is that has made "Doctor Who the phenomenon it has been for more than 40 years. The technical limitations of the era, combined with the BBC's meagre special-effects budget, can make the show appear rather hokey to viewers unaccustomed to its sparse visual style.

However, these technical limitations have also helped to produce many of the most recognizable elements of the show, giving it a charm and colloquiality unique to the world of science fiction. The Doctor's ship, the Hartnell, TARDIS, which became stuck in the form of a British police call box on his first journey to leave Earth, and villains such as the mailbox-shaped Daleks have become icons in popular culture throughout the English-speaking world, thanks largely to these homely qualities.

"One thing that you can kind of see as you go through all the villains is that they all have this kind of zombie walk, so that they can never catch-up with you," Travis said. "That's something that's absolutely essential in the Daleks, and, I think, is a main part of the Daleks' charm."

"I think when I was first watching it I thought ['Doctor Who's' lack of special effects] was a drawback. But now it's almost an attraction, because it's this kind of generic marker. It doesn't look like any other show. "

"There are drawbacks to some parts of the low production value," Travis said, "[but] I think that it's always been an asset of 'Doctor Who' that it makes you fallback on your imagination so strongly, and maybe from a psychological point of view involves you that much more in the experience."

Another outgrowth of "Doctor Who's" production constraints that has become central to the show's identity is the practice known as "regeneration." When the First Doctor, William Hartnell decided to leave the show in 1966, producers introduced the regeneration device into its plot, giving the Doctor the ability to regenerate a new body after his death, a process which Time Lords could undergo 12 times over the course of their lifespan.

Not only did this allow the wildy popular "Doctor Who" to remain on the air after the departure of its star actor, it gave the show a versatility of style and character over its long run, thanks largely to the differing personalities of the Doctor's various incarnations. Some of the key actors who have played the Doctor over the show's history have included Hartnell (1963-1966), Tom Baker (1974-1981), Patrick Troughton (1966-1969) and Jon Pertwee (1970-1974).

"I think that [there are two ways] that you can see their differences," Travis said. "One is their ways of problem solving, which are clearly very active for Pertwee, very manic for Troughton, very studied, but maybe old, for Hartnell and very sarcastic for Tom Baker."

"The other thing is their attitudes towards their companions. Hartnell is so patronizing, Troughton is very mercurial and always wanting them not to understand. [With) Pertwee there is this feeling that he's more human in his relationships and he might actually fall in love with a companion. And Baker is just so condescending all the time, and yet still with a kind of Doctor-like fascination that he exerts upon them, so that they'll follow him to the ends of the universe."

Because of the show's strong emphasis on education in its early years and sweeping reforms to the British educational system that occurred during that period, Dr. Travis sees the relationship between the Doctor and his companions as integral to understanding the larger sociological implications of the show.

"You're dealing with a Britain," he said, "that was trying to figure out how figures of authority should relate to younger figures, because the educational system was undergoing such amazing reform at the time."

"Everybody always says, of course, that it's the stories that make Doctor Who' so wonderful. But I guess the way to put it is that I attribute it to the basic structure of Doctor Who'... the integral relationship between the kind of older, slightly crazy father figure who can take you to the ends of the universe and the regular people, who are very often adolescents themselves, who are dragged along for the ride."