Your worst nightmare .. new Daleks that can go UPSTAIRS! 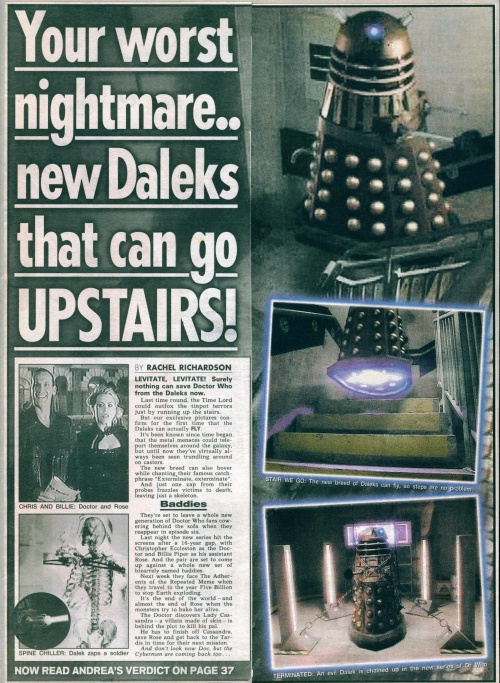 LEVITATE, LEVITATE! Surely nothing can save Doctor Who from the Daleks now.

Last time round, the Time Lord could outfox the tinpot terrors just by running up the stairs. But our exclusive pictures confirm for the first time that the Daleks can actually FLY.

It's been known since time began that the metal menaces could tele-port themselves around the galaxy, but until now they've virtually always been seen trundling around on castors.

The new breed can also hover while chanting their famous catch-phrase "Exterminate, exterminate". And just one zap from their probes frazzles victims to death. leaving just a skeleton.

They're set to leave a whole new generation of Doctor Who fans cowering behind the sofa when they reappear in episode six.

Last night the new series hit the screens after a 16-year gap, with Christopher Eccleston as the Doctor and Billie Piper as his assistant Rose. And the pair are set to come up against a whole new set of bizarrely named baddies.

Next week they face The Adherents of the Repeated Meme when they travel to the year Five Billion to stop Earth exploding.

It's the end of the world — and almost the end of Rose when the monsters try to bake her alive. The Doctor discovers Lady Cassandra — a villain made of skin — is behind the plot to kill his pal.

He has to finish off Cassandra, save Rose and get back to the Tar-dis in time for their next mission. And don't look now Doc, but the Cybermen are coming back too ...

CHRIS AND BILLIE: Doctor and Rose

STAIR WE GO: The new breed of Daleks can fly, so steps are no problem

TERMINATED: An evil Dalek is chained up in the new series of Dr Who