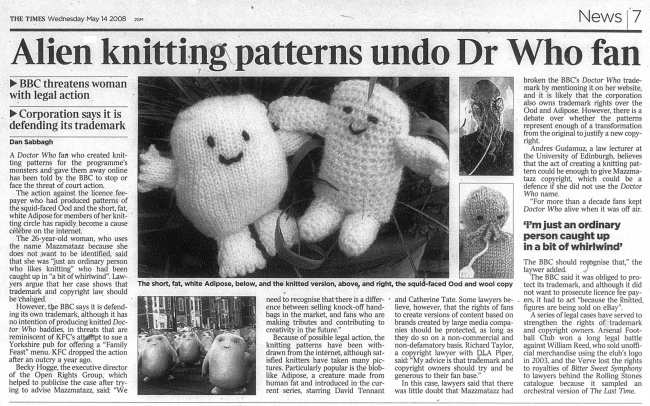 Corporation says it is defending its trademark

A Doctor Who far, who created knitting patterns for the programme's monsters and gave them away online has been told by the BBC to stop or face the threat of court action.

The action against the licence fee-payer who had produced patterns of the squid-faced Ood and the short, fat, white Adipose for members of her knitting circle has rapidly become a cause célèbre on the internet.

The 26-year-old woman, who uses the name Mazzmatazz because she does not want to be identified, said that she was "just an ordinary person who likes knitting" who had been caught up in "a bit of whirlwind". Lawyers argue that her case shows that trademark and copyright law should be changed.

However, the BBC says it is defending its own trademark, although it has no intention of producing knitted Doctor Who baddies, in threats that are reminiscent of KFC's attempt to sue a Yorkshire pub for offering a "Family Feast" menu. KFC dropped the action after an outcry a year ago.

Becky Hogge, the executive director of the Open Rights Group, which helped to publicise the case after trying to advise Mazzmatazz, said: "We need to recognise that there is a difference between selling knock-off handbags in the market, and fans who are making tributes and contributing to creativity in the future."

Because of possible legal action, the knitting patterns have been withdrawn from the internet, although satisfied knitters have taken many pictures. Particularly popular is the blob-like Adipose, a creature made from human fat and introduced in the current series, starring David Tennant and Catherine Tate. Some lawyers believe, however, that the rights of fans to create versions of content based on brands created by large media companies should be protected, as long as they do so on a non-commercial and non-defamatory basis. Richard Taylor, a copyright lawyer with DLA Piper, said: "My advice is that trademark and copyright owners should try and be generous to their fan base."

In this case, lawyers said that there was little doubt that Mazzmatazz had broken the BBC's Doctor Who trademark by mentioning it on her website, and it is likely that the corporation also owns trademark rights over the Ood and Adipose. However, there is a debate over whether the patterns represent enough of a transformation from the original to justify a new copyright.

Andres Gudamuz, a law lecturer at the University of Edinburgh, believes that the act of creating a knitting pattern could be enough to give Mazzmatazz copyright, which could be a defence if she did not use the Doctor Who name.

"For more than a decade fans kept Doctor Who alive when it was off air. The BBC should recognise that," the laywer added.

The BBC said it was obliged to protect its trademark, and although it did not want to prosecute licence fee payers, it had to act "because the knitted. figures are being sold on eBay".

A series of legal cases have served to strengthen the rights of trademark and copyright owners. Arsenal Football Club won a long legal battle against William Reed, who sold unofficial merchandise using the club's logo in 2003, and the Verve lost the rights to royalties of Bitter Sweet Symphony to lawyers behind the Rolling Stones catalogue because it sampled an orchestral version of The Lost Time.

Caption: The short, fat, white Adipose, below, and the knitted version, above, and right, the squid-faced Ood and wool copy