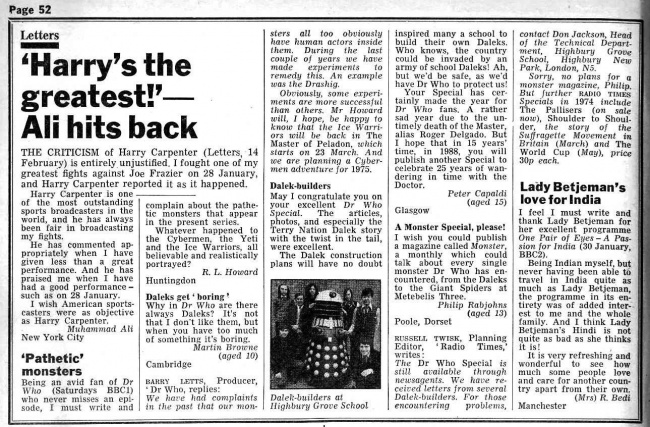 Being an avid fan of Dr Who (Saturdays BBC1) who never misses an episode, I must write and complain about the pathetic monsters that appear in the present series.

Whatever happened to the Cybermen, the Yeti and the Ice Warriors, all believable and realistically portrayed?

Why in Dr Who are there always Daleks? It's not that I don't like them, but when you have too much of something it's boring. Martin Browne (aged 10) Cambridge

We have had complaints in the past that our monsters all too obviously have human actors inside them. During the last couple of years we have made experiments to remedy this. An example was the Drashig.

Obviously, some experiments are more successful than others. Mr Howard will, I hope, be happy to know that the Ice Warriors will be back in The Master of Peladon, which starts on 23 March. And we are planning a Cybermen adventure for 1975.

May I congratulate you on your excellent Dr Who Special. The articles, photos, and especially the Terry Nation Dalek story with the twist in the tail, were excellent.

The Dalek construction plans will have no doubt inspired many a school to build their own Daleks. Who knows, the country could be invaded by an army of school Daleks! Ah, but we'd be safe, as we'd have Dr Who to protect us!

Your Special has certainly made the year for Dr Who fans. A rather sad year due to the untimely death of the Master, alias Roger Delgado. But I hope that in 15 years' time, in 1988, you will publish another Special to celebrate 25 years of wandering in time with the Doctor.

A Monster Special, please! I wish you could publish a magazine called Monster, a monthly which could talk about every single monster Dr Who has encountered, from the Daleks to the Giant Spiders at Metebelis Three.

Sorry, no plans for a monster magazine, Philip. But further RADIO TIMES Specials in 1974 include The Pallisers (on sale now), Shoulder to Shoulder, the story of the Suffragette Movement in Britain (March) and The World Cup (May), price 30p each.