I did stuff I've never done before 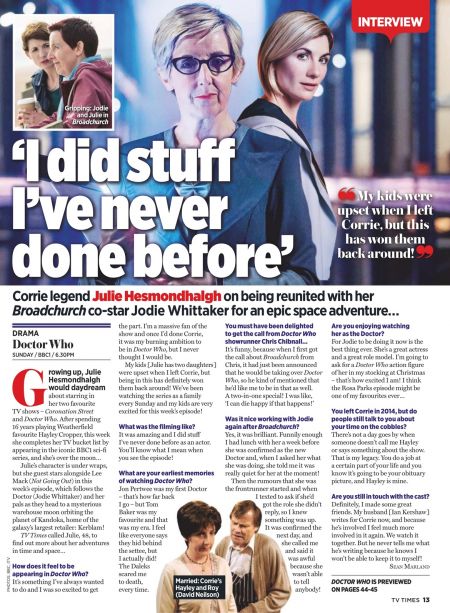 Corrie legend Julie Hesmondhalgh on being reunited with her Broadchurch co-star Jodie Whittaker for an epic space adventure...

Growing up, Julie Hesmondhalgh would daydream about starring in her two favourite TV shows - Coronation Street and Doctor Who. After spending 16 years playing Weatherfield favourite Hayley Cropper, this week she completes her TV bucket list by appearing in the iconic BBC1 sci-fi series, and she's over the moon...

Julie's character is under wraps, but she guest stars alongside Lee Mack (Not Going Out) in this week's episode, which follows the Doctor (Jodie Whittaker) and her pals as they head to a mysterious warehouse moon orbiting the planet of Kandoka, home of the galaxy's largest retailer: Kerblam!

TV Times called Julie, 48, to find out more about her adventures in time and space...

How does it feel to be appearing in Doctor Who?

It's something I've always wanted to do and I was so excited to get the part. I'm a massive fan of the show and once I'd done Corrie, it was my burning ambition to be in Doctor Who, but I never thought I would be.

My kids [Julie has two daughters] were upset when I left Corrie, but being in this has definitely won them back around! We've been watching the series as a family every Sunday and my kids are very excited for this week's episode!

It was amazing and I did stuff I've never done before as an actor. You'll know what I mean when you see the episode!

What are your earliest memories of watching Doctor Who?

Jon Pertwee was my first Doctor - that's how far back I go - but Tom Baker was my favourite and that was my era. I feel like everyone says they hid behind the settee, but I actually did! The Daleks scared me to death, every time.

You must have been delighted to get the call from Doctor Who showrunner Chris Chibnall...

It's funny, because when I first got the call about Broadchurch from Chris, it had just been announced that he would be taking over Doctor Who, so he kind of mentioned that he'd like me to be in that as well. A two-in-one special! I was like, 'I can die happy if that happens!'

Was it nice working with Jodie again after Broadchurch?

Yes, it was brilliant. Funnily enough I had lunch with her a week before she was confirmed as the new Doctor and, when I asked her what she was doing, she told me it was really quiet for her at the moment!

Then the rumours that she was the frontrunner started and when I texted to ask if she'd got the role she didn't reply, so I knew something was up. It was confirmed the next day, and she called me and said it was awful because she wasn't able to tell anybody!

Are you enjoying watching her as the Doctor?

For Jodie to be doing it now is the best thing ever. She's a great actress and a great role model. I'm going to ask for a Doctor Who action figure of her in my stocking at Christmas - that's how excited I am! I think the Rosa Parks episode might be one of my favourites ever...

You left Corrie in 2014, but do people still talk to you about your time on the cobbles?

There's not a day goes by when someone doesn't call me Hayley or says something about the show. That is my legacy. You do a job at a certain part of your life and you know it's going to be your obituary picture, and Hayley is mine.

Are you still in touch with the cast?

Definitely, I made some great friends. My husband [Ian Kershaw] writes for Corrie now, and because he's involved I feel much more involved in it again. We watch it together. But he never tells me what he's writing because he knows I won't be able to keep it to myself!

DOCTOR WHO IS PREVIEWED ON PAGES 44-45