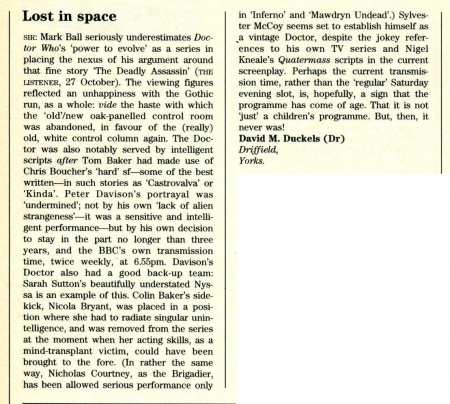 SIR: Mark Ball seriously underestimates Doctor Who's 'power to evolve' as a series in placing the nexus of his argument around that fine story 'The Deadly Assassin' (THE LISTENER, 27 October). The viewing figures reflected an unhappiness with the Gothic run, as a whole: vide the haste with which the 'old'/new oak-panelled control room was abandoned, in favour of the (really) old, white control column again. The Doctor was also notably served by intelligent scripts after Tom Baker had made use of Chris Boucher's 'hard' sf—some of the best written—in such stories as 'Castrovalva' or 'Kinda'. Peter Davison's portrayal was 'undermined'; not by his own 'lack of alien strangeness'—it was a sensitive and intelligent performance—but by his own decision to stay in the part no longer than three years, and the BBC's own transmission time, twice weekly, at 6.55pm. Davison's Doctor also had a good back-up team: Sarah Sutton's beautifully understated Nyssa is an example of this. Colin Baker's sidekick, Nicola Bryant, was placed in a position where she had to radiate singular unintelligence, and was removed from the series at the moment when her acting skills, as a mind-transplant victim, could have been brought to the fore. (In rather the same way, Nicholas Courtney, as the Brigadier, has been allowed serious performance only in 'Inferno' and 'Mawdryn Undead'.) Sylvester McCoy seems set to establish himself as a vintage Doctor, despite the jokey references, to his own TV series and Nigel Kneale's Quatermass scripts in the current screenplay. Perhaps the current transmission time, rather than the 'regular' Saturday evening slot, is, hopefully, a sign that the programme has come of age. That it is not lust' a children's programme. But, then, it never was!