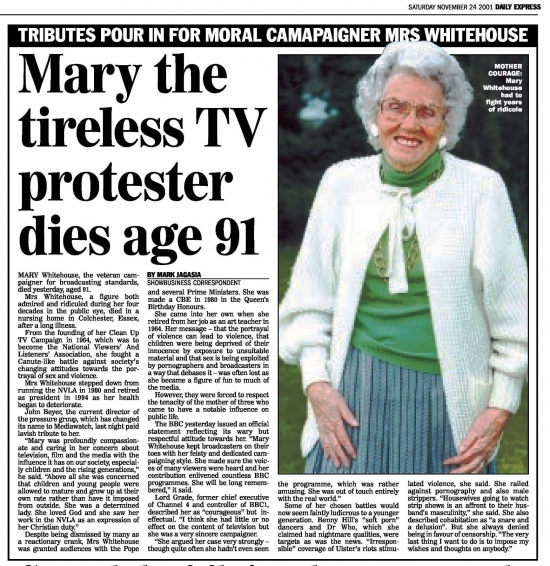 Mrs Whitehouse, a figure both admired and ridiculed during her four decades in the public eye, died in a nursing home in Colchester, Essex, after a long illness.

From the founding of her Clean Up TV Campaign in 1964, which was to become the National Viewers' And Listeners' Association, she fought a Canute-like battle against society's changing attitudes towards the portrayal of sex and violence.

Mrs Whitehouse stepped down from running the NVLA in 1980 and retired as president in 1994 as her health began to deteriorate.

John Beyer, the current director of the pressure group, which has changed its name to Mediawatch, last night paid lavish tribute to her.

"Mary was profoundly compassionate and caring in her concern about television, film and the media with the influence it has on our society, especially children and the rising generations," he said. "Above all she was concerned that children and young people were allowed to mature and grow up at their own rate rather than have it imposed from outside. She was a determined lady. She loved God and she saw her work in the NVLA as an expression of her Christian duty."

Despite being dismissed by many as a reactionary crank, Mrs Whitehouse was granted audiences with the Pope and several Prime Ministers. She was made a CBE in 1980 in the Queen's Birthday Honours.

She came into her own when she retired from her job as an art teacher in 1964. Her message - that the portrayal of violence can lead to violence, that children were being deprived of their innocence by exposure to unsuitable material and that sex is being exploited by pornographers and broadcasters in a way that debases it - was often lost as she became a figure of fun to much of the media.

However, they were forced to respect the tenacity of the mother of three who came to have a notable influence on public life.

The BBC yesterday issued an official statement reflecting its wary but respectful attitude towards her. "Mary Whitehouse kept broadcasters on their toes with her feisty and dedicated campaigning style. She made sure the voices of many viewers were heard and her contribution enlivened countless BBC programmes. She will be long remembered," it said.

Lord Grade, former chief executive of Channel 4 and controller of BBC1, described her as "courageous" but ineffectual. "I think she had little or no effect on the content of television but she was a very sincere campaigner.

"She argued her case very strongly though quite often she hadn't even seen the programme, which was rather amusing. She was out of touch entirely with the real world."

Some of her chosen battles would now seem faintly ludicrous to a younger generation. Benny Hill's "soft porn" dancers and Dr Who, which she claimed had nightmare qualities, were targets as was the news. "Irresponsible" coverage of Ulster's riots stimulated violence, she said. She railed against pornography and also male strippers. "Housewives going to watch strip shows is an affront to their husband's masculinity," she said. She also described cohabitation as "a snare and a delusion". But she always denied being in favour of censorship. "The very last thing I want to do is to impose my wishes and thoughts on anybody"