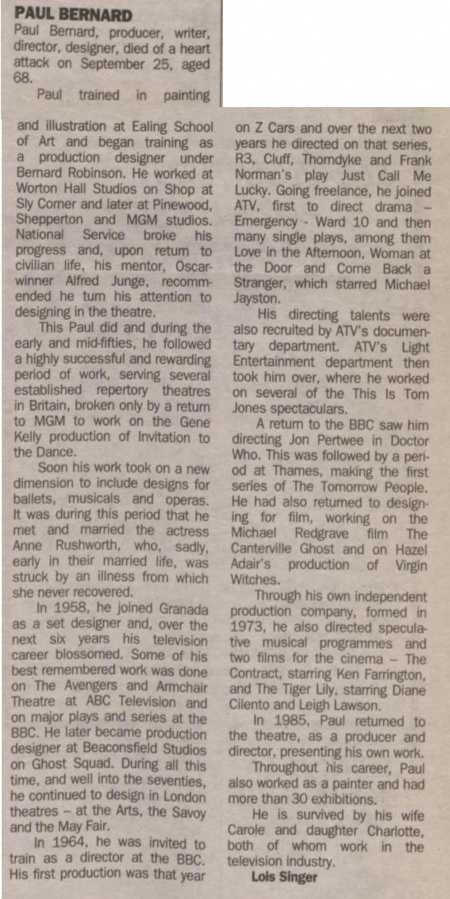 Paul trained in painting and illustration at Ealing School of Art and began training as a production designer under Bernard Robinson. He worked at Worton Hall Studios on Shop at Sly Corner and later at Pinewood. Shepperton and MGM studios. National Service broke his progress and, upon return to civilian life, his mentor, Oscar-winner Alfred Junge, recommended he turn his attention to designing in the theatre.

This Paul did and during the early and mid-fifties, he followed a highly successful and rewarding period of work, serving several established repertory theatres in Britain, broken only by a return to MGM to work on the Gene Kelly production of Invitation to the Dance.

Soon his work took on a new dimension to include designs for ballets, musicals and operas. It was during this period that he met and married the actress Anne Rushworth, who, sadly, early in their married life, was struck by an illness from which she never recovered.

In 1958, he joined Granada as a set designer and, over the next six years his television career blossomed. Some of his best remembered work was done on The Avengers and Armchair Theatre at ABC Television and on major plays and series at the BBC. He later became production designer at Beaconsfield Studios on Ghost Squad. During all this time, and well into the seventies, he continued to design in London theatres - at the Arts, the Savoy and the May Fair.

In 1964, he was invited to train as a director at the BBC. His first production was that year on Z Cars and over the next two years he directed on that series, R3, Cluff, Thorndyke and Frank Norman's play Just Call Me Lucky. Going freelance, he joined AN, first to direct drama Emergency - Ward 10 and then many single plays, among them Love in the Afternoon, Woman at the Door and Come Back a Stranger. which starred Michael Jayston.

His directing talents were also recruited by ATV's documentary department. ATV's Light Entertainment department then took him over, where he worked on several of the This Is Tom Jones spectaculars.

A return to the BBC saw him directing Jon Pertwee in Doctor Who. This was followed by a period at Thames, making the first series of The Tomorrow People. He had also returned to designing for film, working on the Michael Redgrave film The Canterville Ghost and on Hazel Adair's production of Virgin Witches.

Through his own independent production company, formed in 1973, he also directed speculative musical programmes and two films for the cinema - The Contract, starring Ken Farrington, and The Tiger Lily. starring Diane Cilento and Leigh Lawson.

In 1985, Paul returned to the theatre, as a producer and director, presenting his own work.

Throughout his career, Paul also worked as a painter and had more than 30 exhibitions.

He is survived by his wife Carole and daughter Charlotte, both of whom work in the television industry.