A Familiar Diversion in Name Only 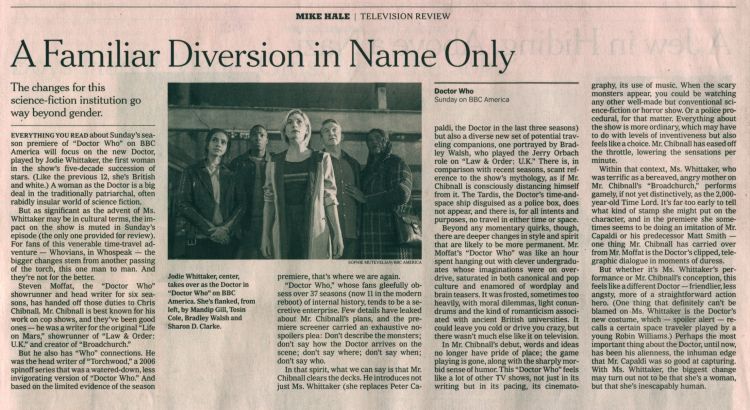 The changes for this science-fiction institution go way beyond gender.

EVERYTHING YOU READ about Sunday's season premiere of "Doctor Who" on BBC America will focus on the new Doctor, played by Jodie Whittaker, the first woman in the show's five-decade succession of stars. (Like the previous 12, she's British and white.) A woman as the Doctor is a big deal in the traditionally patriarchal, often rabidly insular world of science fiction.

But as significant as the advent of Ms. Whittaker may be in cultural terms, the impact on the show is muted in Sunday's episode (the only one provided for review). For fans of this venerable time-travel adventure — Whovians, in Whospeak — the bigger changes stem from another passing of the torch, this one man to man. And they're not for the better.

Steven Moffat, the "Doctor Who" showrunner and head writer for six seasons, has handed off those duties to Chris Chibnall. Mr. Chibnall is best known for his work on cop shows, and they've been good ones — he was a writer for the original "Life on Mars," showrunner of "Law & Order: U.K." and creator of "Broadchurch."

But he also has "Who" connections. He was the head writer of "Torchwood," a 2006 spinoff series that was a watered-down, less invigorating version of "Doctor Who." And based on the limited evidence of the season premiere, that's where we are again.

"Doctor Who," whose fans gleefully obsess over 37 seasons (now 11 in the modern reboot) of internal history, tends to be a secretive enterprise. Few details have leaked about Mr. Chibnall's plans, and the premiere screener carried an exhaustive no-spoilers plea: Don't describe the monsters; don't say how the Doctor arrives on the scene; don't say where; don't say when; don't say who.

In that spirit, what we can say is that Mr. Chibnall clears the decks. He introduces not just Ms. Whittaker (she replaces Peter Capaldi, the Doctor in the last three seasons) but also a diverse new set of potential traveling companions, one portrayed by Bradley Walsh, who played the Jerry Orbach role on "Law & Order: U.K." There is, in comparison with recent seasons, scant reference to the show's mythology, as if Mr. Chibnall is consciously distancing himself from it. The Tardis, the Doctor's time-and-space ship disguised as a police box, does not appear, and there is, for all intents and purposes, no travel in either time or space.

Beyond any momentary quirks, though, there are deeper changes in style and spirit that are likely to be more permanent. Mr. Moffat's "Doctor Who was like an hour spent hanging out with clever undergraduates whose imaginations were on overdrive, saturated in both canonical and pop culture and enamored of wordplay and brain teasers. It was frosted, sometimes too heavily, with moral dilemmas, light conundrums and the kind of romanticism associated with ancient British universities. It could leave you cold or drive you crazy, but there wasn't much else like it on television.

In Mr. Chibnall's debut, words and ideas no longer have pride of place; the game playing is gone, along with the sharply morbid sense of humor. This "Doctor Who feels like a lot of other TV shows, not just in its writing but in its pacing, its cinematography, its use of music. When the scary monsters appear, you could be watching any other well-made but conventional science-fiction or horror show. Or a police procedural, for that matter. Everything about the show is more ordinary, which may have to do with levels of inventiveness but also feels like a choice. Mr. Chibnall has eased off the throttle, lowering the sensations per minute.

Within that context, Ms. Whittaker, who was terrific as a bereaved, angry mother on Mr. Chibnall's "Broadchurch," performs gamely, if not yet distinctively, as the 2,000-year-old Time Lord. It's far too early to tell what kind of stamp she might put on the character, and in the premiere she sometimes seems to be doing an imitation of Mr. Capaldi or his predecessor Matt Smith —one thing Mr. Chibnall has carried over from Mr. Moffat is the Doctor's clipped, telegraphic dialogue in moments of duress.

But whether it's Ms. Whittaker's performance or Mr. Chibnall's conception, this feels like a different Doctor — friendlier, less angsty, more of a straightforward action hero. (One thing that definitely can't be blamed on Ms. Whittaker is the Doctor's new costume, which — spoiler alert — recalls a certain space traveler played by a young Robin Williams.) Perhaps the most important thing about the Doctor, until now, has been his alienness, the inhuman edge that Mr. Capaldi was so good at capturing. With Ms. Whittaker, the biggest change may turn out not to be that she's a woman, but that she's inescapably human.

Caption: Jodie Whittaker, center, takes over as the Doctor in "Doctor Who on BBC America. She's flanked, from left, by Mandip Gill, Tosin Cole, Bradley Walsh and Sharon D. Clarke.