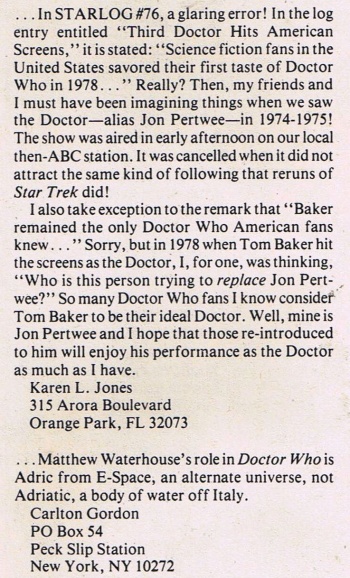 ... In STARLOG #76, a glaring error! In the log entry entitled "Third Doctor Hits American Screens," it is stated: "Science fiction fans in the United States savored their first taste of Doctor Who in 1978..." Really? Then, my friends and I must have been imagining things when we saw the Doctor—alias Jon Pertwee—in 1974-1975! The show was aired in early afternoon on our local then-ABC station. It was cancelled when it did not attract the same kind of following that reruns of Star Trek did!

I also take exception to the remark that "Baker remained the only Doctor Who American fans knew ... " Sorry, but in 1978 when Tom Baker hit the screens as the Doctor, I, for one, was thinking, "Who is this person trying to replace Jon Pertwee?" So many Doctor Who fans I know consider Tom Baker to be their ideal Doctor. Well, mine is Jon Pertwee and I hope that those re-introduced to him will enjoy his performance as the Doctor as much as I have.

. . Matthew Waterhouse's role in Doctor Who is Adric from E-Space, an alternate universe, not Adriatic, a body of water off Italy.