BBC cashes in as new Doctor hits the screens 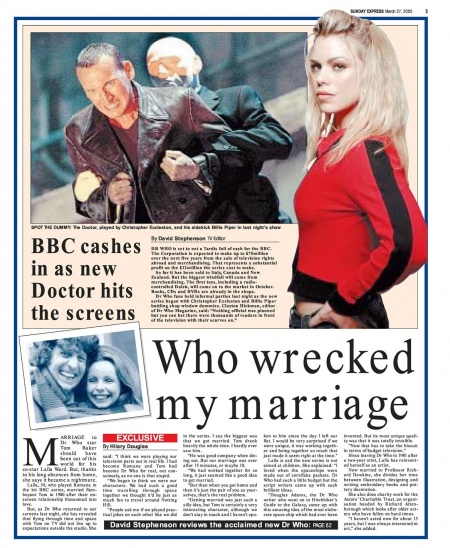 DR WHO is set to net a Tardis full of cash for the BBC. The Corporation is expected to make up to £75million over the next five years from the sale of television rights abroad and merchandising. That represents a substantial profit on the £12million the series cost to make.

So far it has been sold to Italy, Canada and New Zealand. But the biggest windfall will come from merchandising. The first toys, including a radio-controlled Dalek, will come on to the market in October. Books, CDs and DVDs are already in the shops.

Dr Who fans held informal parties last night as the new series began with Christopher Eccleston and Billie Piper battling shop window dummies. Clayton Hickman, editor of Dr Who Magazine, said: "Nothing official was planned but you can bet there were thousands of readers in front of the television with their scarves on."

Caption: SPOT THE DUMMY: The Doctor, played by Christopher Eccleston, and his sidekick Billie Piper in last night's show

Who wrecked my marriage

MARRIAGE to Dr Who star Tom Baker should have been out of this world for his co-star Lalla Ward. But, thanks to his long absences from home, she says it became a nightmare.

Lalla, 54, who played Romana in the hit BBC series, married flamboyant Tom in 1980 after their onscreen relationship blossomed into love.

But, as Dr Who returned to our screens last night, she has revealed that flying through time and space with Tom on TV did not live up to expectations outside the studio. She said: "I think we were playing our television parts out in real life. I had become Romana and Tom had become Dr Who for real, not consciously, as no one is that stupid.

"We began to think we were our characters. We had such a good time travelling through space together we thought it'd be just as much fun to travel around Notting Hill.

"People ask me if we played practical jokes on each other like we did in the series. I say the biggest was that we got married. Tom drank heavily the whole time. I hardly ever saw him.

"He was good company when dining out. But our marriage was over after 15 minutes, or maybe 10.

"We had worked together for so long, it just seemed like a good idea to get married.

"But then when you get home and then it's just the pair of you as yourselves, that's the real problem.

"Getting married was just such a silly idea, but Tom is certainly a very interesting character, although we don't stay in touch and I haven't spo ken to him since the day I left our flat. I would be very surprised if we were unique, it was working together and being together so much that just made it seem right at the time."

Lalla is sad the new series is not aimed at children. She explained: "I loved when the spaceships were made out of cornflake packets. Dr Who had such a little budget but the script writers came up with such brilliant ideas.

"Douglas Adams, the Dr Who writer who went on to Hitchhiker's Guide to the Galaxy, came up with this amazing idea of the most elaborate space ship which had ever been invented. But its most unique quality was that it was totally invisible.

"Now that has to take the biscuit in terms of budget television."

Since leaving Dr Who in 1981 after a two-year stint, Lalla has reinvented herself as an artist.

Now married to Professor Richard Dawkins, she divides her time between illustration, designing and writing embroidery books and pottery decoration.

She also does charity work for the Actors' Charitable Trust, an organisation headed by Richard Atten-borough which looks after older actors who have fallen on hard times.

"I haven't acted now for about 15 years, but I was always interested in art," she added.