Back in time with Doctor Who 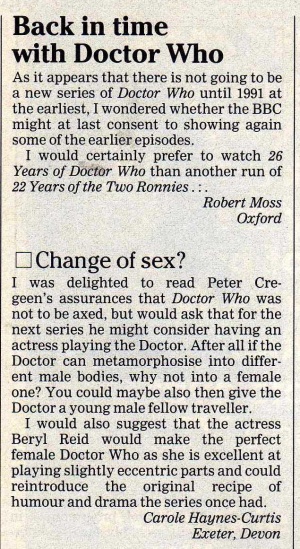 Back in time with Doctor Who

As it appears that there is not going to be a new series of Doctor Who until 1991 at the earliest. I wondered whether the BBC might at last consent to showing again some of the earlier episodes.

I would certainly prefer to watch 26 Years of Doctor Who than another run of 22 Years of the Two Ronnies ...

I was delighted to read Peter Cregeen's assurances that Doctor Who was not to be axed, but would ask that for the next series he might consider having an actress playing the Doctor. After all if the Doctor can metamorphosie into different male bodies, why not into a female one? You could maybe also then give the Doctor a young male fellow traveller. I would also suggest that the actress Beryl Reid would make the perfect female Doctor Who as she is excellent at playing slightly eccentric parts and could reintroduce the original recipe of humour and drama the series once had.