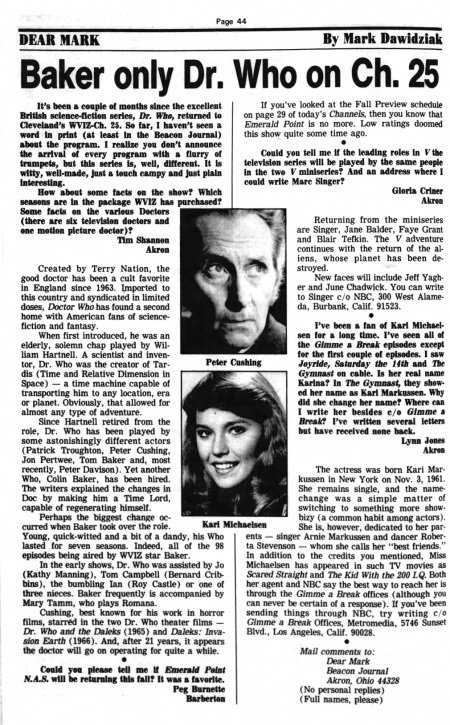 It's been a couple of months since the excellent British science-fiction series, Dr. Who, returned to Cleveland's WVIZ-Ch. 25. So far, I haven't seen a word in print (at least in the Beacon Journal) about the program. I realize you don't announce the arrival of every program with a flurry of trumpets, but this series is, well, different. It is witty, well-made, just a touch campy and just plain Interesting.

How about some facts on the show? Which seasons are in the package WVIZ has purchased? Some facts on the various Doctors (there are six television doctors and one motion picture doctor)?

Created by Terry Nation, the good doctor has been a cult favorite in England since 1963. Imported to this country and syndicated in limited doses, Doctor Who has found a second home with American fans of science-fiction and fantasy.

When first introduced, he was an elderly, solemn chap played by William Hartnell. A scientist and inventor, Dr. Who was the creator of Tardis (Time and Relative Dimension in Space) — a time machine capable of transporting him to any location, era or planet. Obviously, that allowed for almost any type of adventure.

Since Hartnell retired from the role, Dr. Who has been played by some astonishingly different actors (Patrick Troughton, Peter Cushing, Jon Pertwee, Tom Baker and, most recently, Peter Davison). Yet another Who, Colin Baker, has been hired. The writers explained the changes in Doc by making him a Time Lord, capable of regenerating himself.

Perhaps the biggest change occurred when Baker took over the role. Young, quick-witted and a bit of a dandy, his Who lasted for seven seasons. Indeed, all of the 98 episodes being aired by WVIZ star Baker.

In the early shows, Dr. Who was assisted by Jo (Kathy Manning), Tom Campbell (Bernard Cribbins), the bumbling Ian (Roy Castle) or one of three nieces. Baker frequently is accompanied by Mary Tamm, who plays Romana.

Cushing, best known for his work in horror films, starred in the two Dr. Who theater films — Dr. Who and the Daleks (1965) and Daleks: Invasion Earth (1966). And, after 21 years, it appears the doctor will go on operating for quite a while.