Breakfast with the Daleks... 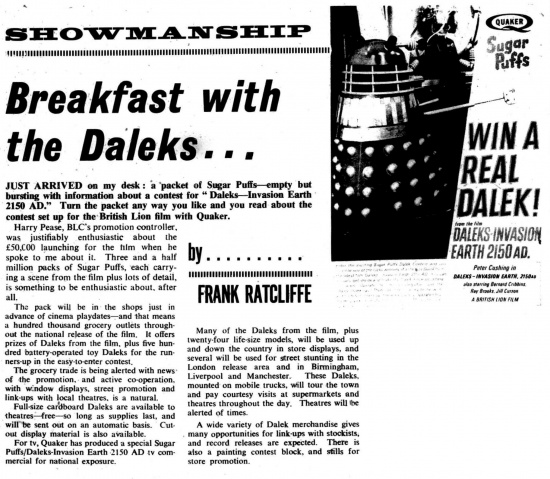 JUST ARRIVED on my desk : a packet of Sugar Puffs—empty but bursting with information about a contest for "Daleks—Invasion Earth 2150 AD." Turn the packet any way you like and you read about the contest set up for the British Lion film with Quaker.

Harry Pease, BLC's promotion controller, was justifiably enthusiastic about the £50,000 launching for the film when he spoke to me about it. Three and a half million packs of Sugar Puffs, each carrying a scene from the film plus lots of detail, is something to be enthusiastic about, after all.

The pack will be in the shops just in advance of cinema playdates—and that means a hundred thousand grocery outlets throughout the national release of the film. It offers prizes of Daleks from the film, plus five hundred battery-operated toy Daleks for the runners-up in the easy-to-enter contest.

The grocery trade is being alerted with news of the promotion. and active co-operation. with window displays, street promotion and link-ups with local theatres, is a natural.

Full-size cardboard Daleks are available to theatres—free—so long as supplies last, and will be sent out on an automatic basis. Cutout display material is also available.

Many of the Daleks from the film, plus twenty-four life-size models, will be used up and down the country in store displays, and several will be used for street stunting in the London release area and in Birmingham, Liverpool and Manchester. These Daleks, mounted on mobile trucks, Will tour the town and pay courtesy visits at supermarkets and theatres throughout the day. Theatres will the alerted of times.

A wide variety of Dalek merchandise gives many opportunities for link-ups with stockists, and record releases are expected. There is also a painting contest block, and stills for store promotion.