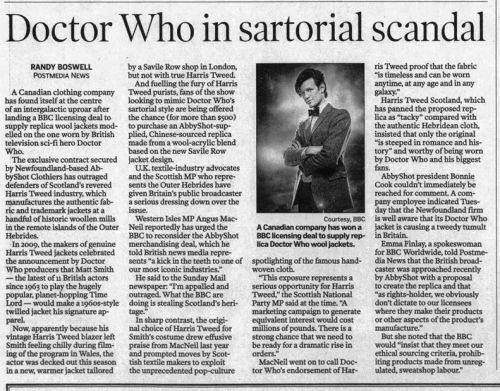 A Canadian clothing company has found itself at the centre of an intergalactic uproar after landing a BBC licensing deal to supply replica wool jackets modelled on the one worn by British television sci-fi hero Doctor Who.

The exclusive contract secured by Newfoundland-based AbbyShot Clothiers has outraged defenders of Scotland's revered Harris Tweed industry, which manufactures the authentic fabric and trademark jackets at a handful of historic woollen mills in the remote islands of the Outer Hebrides.

In 2009, the makers of genuine Harris Tweed jackets celebrated the announcement by Doctor Who producers that Matt Smith - the latest of 11 British actors since 1963 to play the hugely popular, planet-hopping "Time Lord" - would make a 1960s-style twilled jacket his signature apparel.

Now, apparently because his vintage Harris Tweed blazer left Smith feeling chilly during filming of the program in Wales, the actor was decked out this season in a new, warmer jacket tailored by a Savile Row shop in London, but not with true Harris Tweed.

And fuelling the fury of Harris Tweed purists, fans of the show looking to mimic Doctor Who's sartorial style are being offered the chance (for more than $500) to purchase an AbbyShot-supplied, Chinese-sourced replica made from a wool-acrylic blend based on the new Savile Row jacket design.

U.K. textile-industry advocates and the Scottish MP who represents the Outer Hebrides have given Britain's public broadcaster a serious dressing down over the issue.

Western Isles MP Angus MacNeil reportedly has urged the BBC to reconsider the AbbyShot merchandising deal, which he told British news media represents "a kick in the teeth to one of our most iconic industries."

He said to the Sunday Mail: "I'm appalled and outraged. What the BBC are doing is stealing Scotland's heritage."

"This exposure represents a serious opportunity for Harris Tweed," the Scottish National Party MP said at the time. "A marketing campaign to generate equivalent interest would cost millions of pounds. There is a strong chance that we need to be ready for a dramatic rise in orders."

MacNeil went on to call Doctor Who's endorsement of Harris Tweed proof that the fabric "is timeless and can be worn anytime, at any age and in any galaxy."

Harris Tweed Scotland, which has panned the proposed replica as "tacky" compared with the authentic Hebridean cloth, insisted that only the original "is steeped in romance and history" and worthy of being worn by Doctor Who and his biggest fans.

AbbyShot president Bonnie Cook couldn't immediately be reached for comment. A company employee indicated Tuesday that the Newfoundland firm is well aware that its Doctor Who jacket is causing a tweedy tumult in Britain.

Emma Finlay, a spokesperson for BBC Worldwide, told Postmedia News that the British broadcaster was approached recently by Abby-Shot with a proposal to create the replica and that "as rights-holder, we obviously don't dictate to our licensees where they make their products or other aspects of the product's manufacture."

But she noted that the BBC would "insist that they meet our ethical sourcing criteria, prohibiting products made from unregulated, sweatshop labour."

The company's online catalogue includes replicas of leather jackets worn by characters from movies such as Mad Max, Matrix and Kill Bill. Clothing inspired by a previous Doctor Who series is also on offer.

"Our garments are meant to not only look like the movie versions, not only look good, but are also meant to be worn and enjoyed on an everyday basis," AbbyShot states at the website.

"Making real clothes, not costumes, is an important distinction to us, and a level of quality that we take pride in."