Coming soon: A Who's Who of Dr Whos 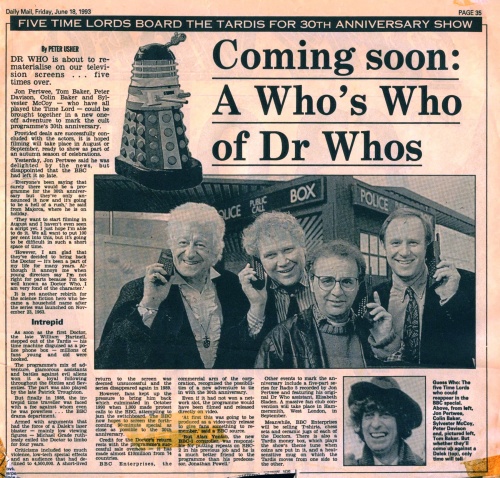 FIVE TIME LORDS BOARD THE TARDIS FOR 30TH ANNIVERSARY SHOW

DR WHO is about to re-materialise on our television screens ... five times over.

Jon Pertwee, Tom Baker, Peter Davison, Colin Baker and Sylvester McCoy — who have all played the Time Lord — could be brought together in a new one-off adventure to mark the cult programme's 30th anniversary.

Provided deals are successfully concluded with the actors, it is hoped filming will take place in August or September, ready to show as part of an autumn season of celebrations.

Yesterday, Jon Pertwee said he was delighted by the news, but disappointed that the BBC had left it so late.

Everyone's been saying that surely there would be a programme for the 30th anniversary but they've only announced it now and it's going to be a hell of a rush,' he said from Majorca, where he is on holiday.

'They want to start filming in August and I haven't even seen a script yet. I just hope I'm able to do it. We all want to put 100 per cent into this, but it's going to be difficult in such a short space of time.

'However, I am glad that they've decided to bring back the Doctor — it's been a part of my life for many years. Although it annoys me when young directors say I'm not right for parts because I'm too well known as Doctor Who, I am very fond of the character.'

It is yet another rebirth for the science fiction hero who became a household name after the series was launched on November 23, 1963.

As soon as the first Doctor, the late William Hartnell, stepped out of the Tardis — his time machine disguised as a police phone box — millions of fans young and old were hooked.

The programme's mix of adventure, glamorous assistants and battles against evil aliens won it a loyal following throughout the Sixties and Seventies. The part was also played by the late Patrick Troughton.

But finally in 1986, the intrepid time traveller was faced with a foe against whom even he was powerless ... the BBC drama department.

Armed with arguments that had the force of a Dalek's laser blaster — mainly low viewing figures — Michael Grade ruthlessly exiled the Doctor to limbo for four years.

Criticisms included too much violence, low-tech special effects and an audience that had declined to 4,500,000. A short-lived return to the screen was deemed unsuccessful and the series disappeared again in 1989.

However, fans kept up the pressure to bring him back which culminated in October 1990 when 1,000 made protest calls to the BBC, attempting to jam the switchboard. The BBC now hopes to screen the forthcoming 90-minute special as close as possible to the 30th anniversary.

Credit for the Doctor's return rests with the programme's successful sale overseas — it has made almost £10million from 74 countries.

BBC Enterprises, the commercial arm of the corporation, recognised the possibilities of a new adventure to tie in with the 30th anniversary. Even if it had not won a network slot, the programme would have been filmed and released directly on video.

'At first this was going to be produced as a video-only release to give fans something to remember,' said a BBC source. 'But Alan Yentob, the new BBC-1 controller, was responsible for putting repeats on BBC-2 in his previous job and he is a much better friend to the programme than his predecessor, Jonathan Powell.'

Other events to mark the anniversary include a five-part series for Radio 5 recorded by Jon Pertwee and featuring his original Dr Who assistant, Elisabeth Sladen. A massive fan club convention will take place in Hammersmith, West London, in September.

Meanwhile, BBC Enterprises will be selling T-shirts, chess sets and ceramic jugs of each of the Doctors. There is also a Tardis money box, which plays the show's theme tune when coins are put in it, and a heat-sensitive mug on which the Tardis moves from one side to the other.

Caption: Guess Who: The five Time Lords who could reappear in the BBC special. Above, from loft, Jon Pertwee, Colin Baker, Sylvester McCoy, Peter Davison and, pictured left, Tom Baker. But whether they'll come up against a Dalek (top), only time will tell