Daleks find their voice as Tardis lands in digital age 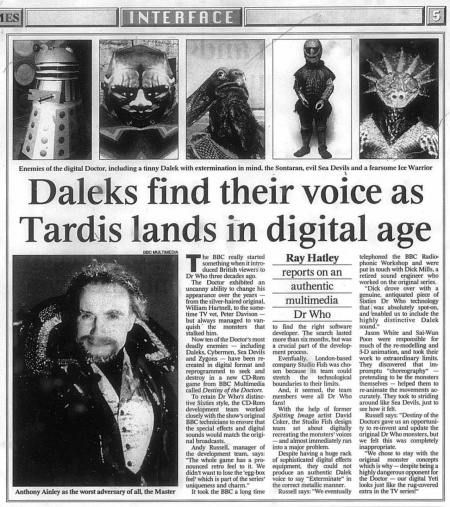 Ray Hatley reports on an authentic multimedia Dr Who

The BBC really started something when it introduced British viewers to Dr Who three decades ago.

The Doctor exhibited an uncanny ability to change his appearance over the years - from the silver-haired original, William Hartnell, to the sometime TV vet, Peter Davison - but always managed to vanquish the monsters that stalked him.

Now ten of the Doctor's most deadly enemies - including Daleks, Cybermen, Sea Devils and Zygons - have been re-created in digital format and reprogrammed to seek and destroy in a new CD-Rom game from BBC Multimedia called Destiny of the Doctors.

To retain Dr Who's distinctive Sixties style, the CD-Rom development team worked closely with the show's original BBC technicians to ensure that the special effects and digital sounds would match the original broadcasts.

Andy Russell, manager of the development team, says: "The whole game has a pronounced retro feel to it. We didn't want to lose the 'egg-box feel' which is part of the series' uniqueness and charm."

It took the BBC a long time to find the right software developer. The search lasted more than six months, but was a crucial part of the development process.

Eventually, London-based company Studio Fish was chosen because its team could stretch the technological boundaries to their limits.

And, it seemed, the team members were all Dr Who fans!

With the help of former Spitting Image artist David Coker, the Studio Fish design team set about digitally recreating the monsters' voices - and almost immediately ran into a major problem.

Despite having a huge rack of sophisticated digital effects equipment, they could not produce an authentic Dalek voice to say "Exterminate" in the correct metallic manner.

Russell says: "We eventually telephoned the BBC Radio phonic Workshop and were put in touch with Dick Mills, a retired sound engineer who worked on the original series.

"Dick drove over with a genuine, antiquated piece of Sixties Dr Who technology that was absolutely spot-on, and enabled us to include the highly distinctive Dalek sound."

Jason White and Sai-Wun Poon were responsible for much of the remodelling and 3-D animation, and took their work to extraordinary limits. They discovered that impromptu "choreography" - pretending to be the monsters themselves - helped them to re-animate the movements accurately. They took to striding around like Sea Devils, just to see how it felt.

Russell says: "Destiny of the Doctors gave us an opportunity to re-invent and update the original Dr Who monsters, but we felt this was completely inappropriate.

"We chose to stay with the original monster concepts which is why - despite being a highly dangerous opponent for the Doctor - our digital Yeti looks just like the rug-covered extra in the TV series!

Caption: Enemies of the digital Doctor, including a tinny Dalek with extermination in mind, the Sontaran, evil Sea Devils and a fearsome Ice Warrior

Caption: Anthony Ainley as the worst adversary of all, the Master.