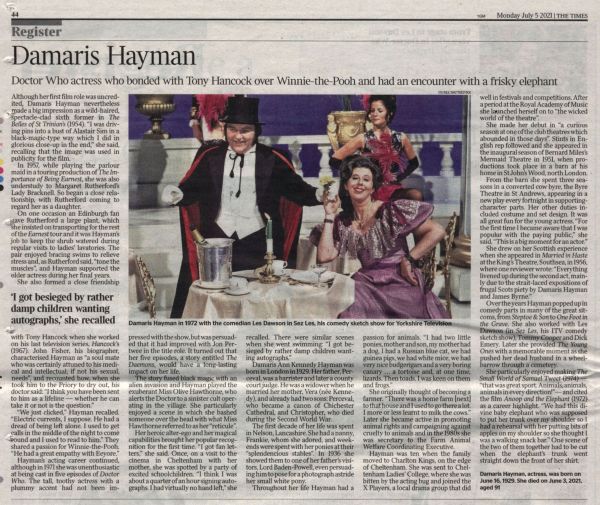 Although her first film role was uncredited, Damaris Hayman nevertheless made a big impression as a wild-haired, spectacle-clad sixth former in The Belles of St Trinian's (1954). "I was driving pins into a bust of Alastair Sim in a black-magic-type way which I did in glorious close-up in the end," she said, recalling that the image was used in publicity for the film.

In 1957, while playing the parlour maid in a touring production of The Importance of Being Earnest, she was also understudy to Margaret Rutherford's Lady Bracknell. So began a close relationship, with Rutherford coming to regard her as a daughter.

On one occasion an Edinburgh fan gave Rutherford a large plant, which she insisted on transporting for the rest of the Earnest tour and it was Hayman's job to keep the shrub watered during regular visits to ladies' lavatories. The pair enjoyed bracing swims to relieve stress and, as Rutherford said, "tone the muscles", and Hayman supported the older actress during her final years.

She also formed a close friendship with Tony Hancock when she worked on his last television series, Hancock's (1967). John Fisher, his biographer, characterised Hayman as "a soul mate who was certainly attuned to his medical and intellectual, if not his sexual, needs", and recounted how, when she took him to the Priory to dry out, his doctor said: "I think you have been sent to him as a lifeline — whether he can take it or not is the question."

"We just clicked," Hayman recalled. "Electric currents, I suppose. He had a dread of being left alone. I used to get calls in the middle of the night to come round and I used to read to him." They shared a passion for Winnie-the-Pooh. "He had a great empathy with Eeyore."

Hayman's acting career continued, although in 1971 she was unenthusiastic at being cast in five episodes of Doctor Who. The tall, toothy actress with a plummy accent had not been impressed with the show, but was persuaded that it had improved with Jon Pertwee in the title role. It turned out that her five episodes, a story entitled The Daemons, would have a long-lasting impact on her life.

The story fused black magic with an alien invasion and Hayman played the exuberant Miss Olive Hawthorne, who alerts the Doctor to a sinister cult operating in the village. She particularly enjoyed a scene in which she bashed someone over the head with what Miss Hawthorne referred to as her "reticule".

Her heroic alter-ego and her magical capabilities brought her popular recognition for the first time. "I got fan letters," she said. Once, on a visit to the cinema in Cheltenham with her mother, she was spotted by a party of excited schoolchildren. "I think I was about a quarter of an hour signing autographs. I had virtually no hand left," she recalled. There were similar scenes when she went swimming: "I got besieged by rather damp children wanting autographs."

Damaris Ann Kennedy Hayman was born in London in 1929. Her father, Perceval, was a barrister and later a county court judge. He was a widower when he married her mother, Vera (nee Kennedy), and already had two sons: Perceval, who became a canon of Chichester Cathedral, and Christopher, who died during the Second World War.

The first decade of her life was spent in Nelson, Lancashire. She had a nanny, Frankie, whom she adored, and weekends were spent with her ponies at their "splendencious stables". In 1936 she showed them to one of her father's visitors, Lord Baden-Powell, even persuading him to pose fora photograph astride her small white pony.

Throughout her life Hayman had a passion for animals. "I had two little ponies, mother and son, my mother had a dog, I had a Russian blue cat, we had guinea pigs, we had white mice, we had very nice budgerigars and a very boring canary ... a tortoise and, at one time, lizards. Then toads. I was keen on them and frogs."

She originally thought of becoming a farmer. "There was a home farm [next] to that house and I used to go there a lot. I more or less learnt to milk the cows." Later she became active in promoting animal rights and campaigning against cruelty to animals and in the 1980s she was secretary to the Farm Animal Welfare Coordinating Executive.

Hayman was ten when the family moved to Charlton Kings, on the edge of Cheltenham. She was sent to Cheltenham Ladies' College, where she was bitten by the acting bug and joined the X Players, a local drama group that did well in festivals and competitions. After a period at the Royal Academy of Music she launched herself on to "the wicked world of the theatre".

She made her debut in "a curious season at one of the club theatres which abounded in those days". Stints in English rep followed and she appeared in the inaugural season of Bernard Miles's Mermaid Theatre in 1951, when productions took place in a barn at his home in St John's Wood, north London.

From the barn she spent three seasons in a converted cow byre, the Byre Theatre in St Andrews, appearing in a new play every fortnight in supporting-character parts. Her other duties included costume and set design. It was all great fun for the young actress. "For the first time I became aware that I was popular with the paying public," she said. "This is a big moment for an actor."

She drew on her Scottish experience when she appeared in Married in Haste at the King's Theatre, Southsea, in 1956, where one reviewer wrote: "Everything livened up during the second act, mainly due to the strait-laced expositions of frugal Scots piety by Damaris Hayman and James Byrne."

Over the years Hayman popped up in comedy parts in many Of the great sitcoms, from Steptoe & Son to One Foot in the Grave. She also worked with Les Dawson (in Sez Les, his ITV comedy sketch show). Tommy Cooper and Dick Emery. Later she provided The Young Ones with a memorable moment as she pushed her dead husband in a wheelbarrow through a cemetery.

She particularly enjoyed making The Small World of Samuel Tweet (1974) "that was great sport. Animals, animals, animals in every direction!"— and cited the film Anoop and the Elephant (1972) as a career highlight. "We had this divine baby elephant who was supposed to put her trunk over my shoulder so I had a rehearsal with her putting bits of apples on my shoulder so she thought I was a walking snack bar." One scene of the two of them together had to be cut when the elephant's trunk went straight down the front of her shirt.

Caption: Damaris Hayman in 1972 with the comedian Les Dawson in Sez Les, his comedy sketch show for Yorkshire Television