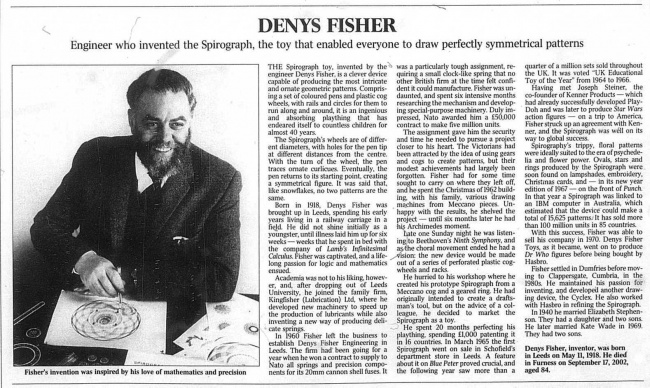 Engineer who invented the Spirograph, the toy that enabled everyone to draw perfectly symmetrical patterns

THE Spirograph toy, invented by the engineer Denys Fisher, is a clever device capable of producing the most intricate and ornate geometric patterns. Comprising a set of coloured pens and plastic cog wheels, with rails and circles for them to run along and around, it is an ingenious and absorbing plaything that has endeared itself to countless children for almost 40 years.

The Spirograph's wheels are of different diameters, with holes for the pen tip at different distances from the centre. With the turn of the wheel, the pen traces ornate curlicues. Eventually, the pen returns to its starting point, creating a symmetrical figure. It was said that, like snowflakes, no two patterns are the same.

Born in 1918, Denys Fisher was brought up in Leeds, spending his early years living in a railway carriage in a field. He did not shine initially as a youngster, until illness laid him up for six weeks -weeks that he spent in bed with the company of Lamb's Infinitesimal Calculus. Fisher was captivated, and a lifelong passion for logic and mathematics ensued.

Academia was not to his liking, however, and, after dropping out of Leeds University, he joined the family firm, King-fisher (Lubrication) Ltd, where he developed new machinery to speed up the production of lubricants while also in-venting a new way of producing delicate springs.

In 1960 Fisher left the business to establish Denys Fisher Engineering in Leeds. The firm had been going for a year when he won a contract to supply to Nato all springs and precision components for its 20mm cannon shell fuses. It was a particularly tough assignment, requiring a small clock-like spring that no other British firm at the time felt confident it could manufacture. Fisher was undaunted, and spent six intensive months researching the mechanism and developing special-purpose machinery. Duly impressed, Nato awarded him a Pounds 50,000 contract to make five million units.

The assignment gave him the security and time he needed to pursue a project closer to his heart. The Victorians had been attracted by the idea of using gears and cogs to create patterns, but their modest achievements had largely been forgotten. Fisher had for some time sought to carry on where they left off, and he spent the Christmas of 1962 building, with his family, various drawing machines from Meccano pieces. Unhappy with the results, he shelved the project -until six months later he had his Archimedes moment.

Late one Sunday night he was listening to Beethoven's Ninth Symphony, and as the choral movement ended he had a vision: the new device would be made out of a series of perforated plastic cog-wheels and racks.

He hurried to his workshop where he created his prototype Spirograph from a Meccano cog and a geared ring. He had originally intended to create a draftsman's tool, but on the advice of a colleague, he decided to market the Spirograph as a toy.

He spent 20 months perfecting his plaything, spending Pounds 1,000 patenting it in 16 countries. In March 1965 the first Spirograph went on sale in Schofield's department store in Leeds. A feature about it on Blue Peter proved crucial, and the following year saw more than a quarter of a million sets sold throughout the UK. It was voted "UK Educational Toy of the Year" from 1964 to 1966.

Having met Joseph Steiner, the co-founder of Kenner Products -which had already successfully developed Play-Doh and was later to produce Star Wars action figures -on a trip to America, Fisher struck up an agreement with Kenner, and the Spirograph was well on its way to global success.

Spirography's trippy, floral patterns were ideally suited to the era of psychedelia and flower power. Ovals, stars and rings produced by the Spirograph were soon found on lampshades, embroidery, Christmas cards, and -in its new year edition of 1967 -on the front of Punch. In that year a Spirograph was linked to an IBM computer in Australia, which estimated that the device could make a total of 15,625 patterns. It has sold more than 100 million units in 85 countries.

With this success, Fisher was able to sell his company in 1970. Denys Fisher Toys, as it became, went on to produce Dr Who figures before being bought by Hasbro.

Fisher settled in Dumfries before moving to Clappersgate, Cumbria, in the 1980s. He maintained his passion for inventing, and developed another drawing device, the Cyclex. He also worked with Hasbro in refining the Spirograph.

In 1940 he married Elizabeth Stephenson. They had a daughter and two sons. He later married Kate Wade in 1969. They had two sons.