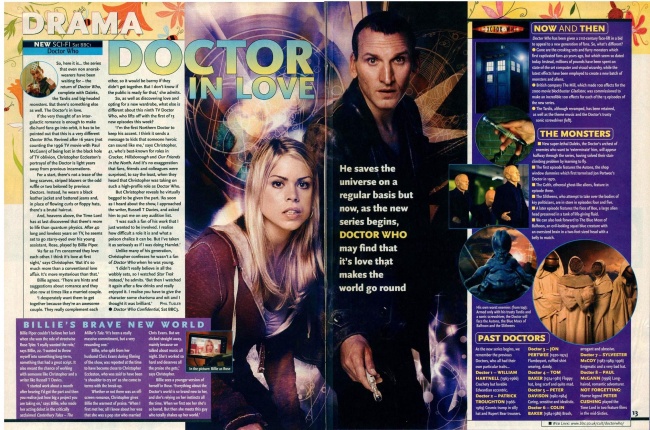 He saves the universe on a regular basis but now, as the new series begins, DOCTOR WHO may find that it's love that makes the world go round

So, here it is... the series that even non anorak-wearers have been waiting for — the return of Doctor Who, complete with Daleks, the Tardis and big-headed monsters. But there's something else as well. The Doctor's in love.

If the very thought of an intergalactic romance is enough to make die-hard fans go into orbit, it has to be pointed out that this is a very different Doctor Who. Revived after 16 years (not counting the 1996 TV movie with Paul McGann) of being lost in the black hole of TV oblivion, Christopher Eccleston's portrayal of the Doctor is light years away from previous incarnations.

For a start, there's not a trace of the long scarves, striped blazers or the odd ruffle or two beloved by previous Doctors. Instead, he wears a black leather jacket and battered jeans and, in place of flowing curls or floppy hats, there's a brutal haircut.

And, heavens above, the Time Lord has at last discovered that there's more to life than quantum physics. After 4o long and loveless years on TV, he seems set to go starry-eyed over his young assistant, Rose, played by Billie Piper.

'As far as I'm concerned they love each other. I think it's love at first sight,' says Christopher. 'But it's so much more than a conventional love affair. It's more mysterious than that.'

Billie agrees. 'There are hints and suggestions about romance and they also row at times like a married couple.

'I desperately want them to get together because they're an awesome couple. They really complement each other, so it would be barmy if they didn't get together. But I don't know if the public is ready for that,' she admits.

So, as well as discovering love and opting for a new wardrobe, what else is different about this ninth TV Doctor Who, who lifts off with the first of 13 new episodes this week?

'I'm the first Northern Doctor to keep his accent. I think it sends a message to kids that someone heroic can sound like me,' says Christopher, 41, who's best-known for roles in Cracker, Hillsborough and Our Friends in the North. And it's no exaggeration that fans, friends and colleagues were surprised, to say the least, when they heard that Christopher was taking on such a high-profile role as Doctor Who.

But Christopher reveals he virtually begged to be given the part. 'As soon as I heard about the show, I approached the writer, Russell T Davies, and asked him to put me on any audition list.

'I was such a fan of his work that I just wanted to be involved. I realise how difficult a role it is and what a poison chalice it can be. But I've taken it as seriously as if I was doing Hamlet.'

Unlike many of his generation, Christopher confesses he wasn't a fan of Doctor Who when he was young.

I didn't really believe in all the wobbly sets, so I watched Star Trek instead,' he admits. 'But then I watched it again after a few drinks and really enjoyed it. I realise you have to give the character some charisma and wit and I thought it was brilliant.'

Billie Piper couldn't believe her luck when she won the role of streetwise Rose Tyler. 'I really wanted the role,' says Billie, 22. 'I wanted to throw myself into something long-term, something that had a great script. It also meant the chance of working with someone like Christopher and a writer like Russell T Davies.

'I started work about a month after hearing I'd got the part and then you realise just how big a project you are taking on,' says Billie, who made her acting debut in the critically acclaimed Canterbury Tales The Miller's Tale. 'It's been a really massive commitment, but a very rewarding one.'

Billie, who split from her husband Chris Evans during filming of the show, was reported at the time to have become close to Christopher Eccleston, who was said to have been 'a shoulder to cry on' as she came to terms with the break-up.

Whether or not there was an off-screen romance, Christopher gives Billie the warmest of praise. 'When I first met her, all I knew about her was that she was a pop star who married Chris Evans. But we clicked straight away, mainly because we talked about music all night. She's worked so hard and deserves all the praise she gets,' says Christopher.

Billie sees a younger version of herself in Rose. 'Everything about the Doctor's world is so brand new to her, and she's relying on her instincts all the time. When we first see her she's so bored. But then she meets this guy who totally shakes up her world.'

Caption: In the picture: Billie as Rose

Doctor Who has been given a 21st-century face-lift in a bid to appeal to a new generation of fans. So, what's different?

Caption: His own worst enemies (from top): Armed only with his trusty Tardis and a sonic screwdriver, the Doctor will face the Autons, the Blue Moxx of Balhoon and the Slitheens

As the new series begins, we remember the previous Doctors, who all had their own particular traits...