Dr. Who fans get magazine, pen pals and upset by errors 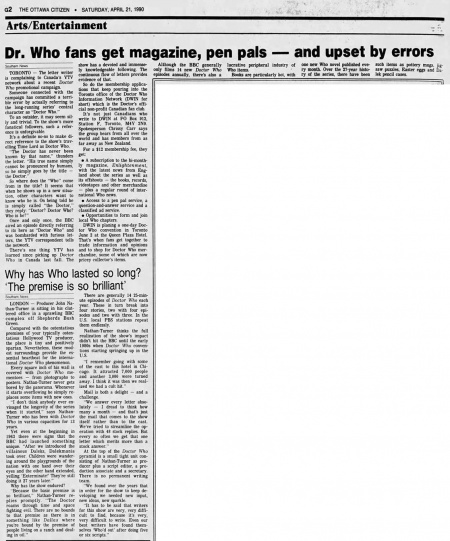 TORONTO — The letter writer is complaining to Canada's YTV network about a recent Doctor Who promotional campaign.

It's a definite no-no to make direct reference to the show's travelling Time Lord as Doctor Who.

"The Doctor has never been known by that name," thunders the letter. "His true name simply cannot be pronounced by humans, so he simply goes by the title -the Doctor."

So where does the "Who" come from in the title? It seems that when he shows up in a new situation, other characters want to know who he is. On being told he is simply called "the Doctor," they reply: "Doctor? Doctor Who? Who is he?"

Once and only once, the BBC aired an episode directly referring to its hero as "Doctor Who" and was bombarded with furious letters, the YTV correspondent tells the network.

There's one thing YTV has learned since picking up Doctor Who in Canada last fall. The show has a devoted and immensely knowledgeable following. The continuous flow of letters provides evidence of that.

So do the membership applications that keep pouring into the Toronto office of the Doctor Who Information Network (DWIN for short) which is the Doctor's official non-profit Canadian fan club.

It's not just Canadians who write to DWIN at PO Box 912, Station F, Toronto, M4Y 2N9. Spokesperson Chrissy Carr says the group hears from all over the world and has members from as far away as New Zealand.

• A subscription to the bimonthly magazine, Enlightenment, with the latest news from England about the series as well as its offshoots — the books, records, videotapes and other merchandise — plus a regular round of international Who news.

• Access to a pen pal service, a question-and-answer service and a classified ad service.

• Opportunities to form and join local Who chapters.

DWIN is planing a one-day Doctor Who convention in Toronto June 2 at the Queen Plaza Hotel. That's when fans get together to trade information and opinions and to shop for Doctor Who merchandise, some of which are now pricey collector's items.

Although the BBC generally only films 14 new Doctor Who episodes annually, there's also a lucrative peripheral industry of Who items.

Books are particularly hot, with one new Who novel published every month. Over the 27-year history of the series, there have been such items as pottery mugs, jigsaw puzzles, Easter eggs and Dalek pencil cases.

Why has Who lasted so long? 'The premise is so brilliant'

LONDON — Producer John Nathan-Turner is sitting in his cluttered office in a sprawling BBC complex off Shepherds Bush Green.

Compared with the ostentatious premises of your typically ostentatious Hollywood TV producer, the place is tiny and positively spartan. Nevertheless, these modest surroundings provide the essential heartbeat for the international Doctor Who phenomenon.

Every square inch of his wall is covered with Doctor Who mementoes — from photographs to posters. Nathan-Turner never gets bored by the panorama. Whenever it starts overflowing he simply replaces some items with new ones.

"I don't think anybody ever envisaged the longevity of the series when it started," says Nathan-Turner who has been with Doctor Who in various capacities for 13 years.

Yet even at the beginning in 1963 there were signs that the BBC had launched something unique. "After we introduced the villainous Daleks, Dalekmania took over. Children were wandering around the playgrounds of the nation with one hand over their eyes and the other hand extended, yelling 'Exterminate!' They're still doing it 27 years later."

Why has the show endured?

"Because the basic premise is so brilliant," Nathan-Turner replies promptly. "The Doctor roams through time and space fighting evil. There are no bounds to that premise as there is in something like Dallas where you're bound by the premise of people living on a ranch and dealing in oil."

There are generally 14 25-minute episodes of Doctor Who each year. These in turn break into four stories, two with four episodes and two with three. In the U.S. local PBS stations repeat them endlessly.

Nathan-Turner thinks the full realization of the show's impact didn't hit the BBC until the early 1980s when Doctor Who conventions starting springing up in the U.S.

"I remember going with some of the cast to this hotel in Chicago. It attracted 7,000 people and another 3,000 were turned away. I think it was then we realized we had a cult hit."

Mail is both a delight — and a challenge.

"We answer every letter absolutely — I dread to think how many a month — and that's just the mail that comes to the show itself rather than to the cast. We've tried to streamline the operation with 48 stock replies. But every so often we get that one letter which merits more than a stock answer."

At the top of the Doctor Who pyramid is a small tight unit consisting of Nathan-Turner as producer plus a script editor, a production associate and a secretary. There is no permanent writing team.

"We found over the years that in order for the show to keep developing we needed new input, new ideas, new sparkle.