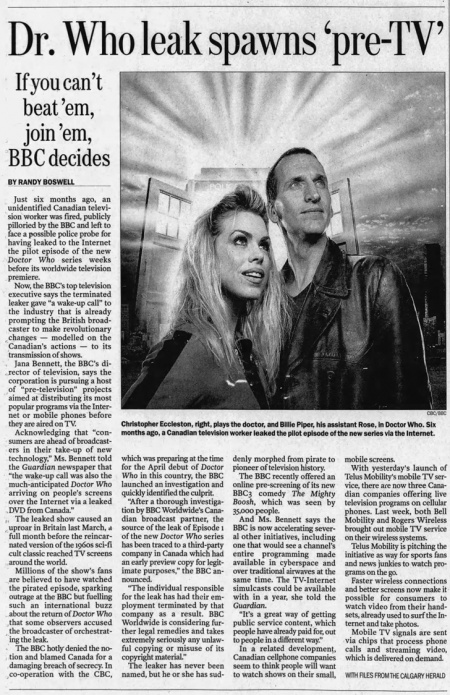 Just six months ago, an unidentified Canadian television worker was fired, publicly pilloried by the BBC and left to face a possible police probe for having leaked to the Internet the pilot episode of the new Doctor Who series weeks before its worldwide television premiere.

Now, the BBC's top television executive says the terminated leaker gave "a wake-up call" to the industry that is already prompting the British broadcaster to make revolutionary changes — modelled on the Canadian's actions — to its transmission of shows.

Jana Bennett, the BBC's director of television, says the corporation is pursuing a host of "pre-television" projects aimed at distributing its most popular programs via the Internet or mobile phones before they are aired on TV.

Acknowledging that "consumers are ahead of broadcasters in their take-up of new technology," Ms. Bennett told the Guardian newspaper that "the wake-up call was also the much-anticipated Doctor Who arriving on people's screens over the Internet via a leaked DVD from Canada."

The leaked show caused an uproar in Britain last March, a full month before the reincarnated version of the 196os sci-fi cult classic reached TV screens around the world.

Millions of the show's fans are believed to have watched the pirated episode, sparking outrage at the BBC but fuelling such an international buzz about the return of Doctor Who that some observers accused the broadcaster of orchestrating the leak.

The BBC hotly denied the notion and blamed Canada for a damaging breach of secrecy. In co-operation with the CBC, which was preparing at the time for the April debut of Doctor Who in this country, the BBC launched an investigation and quickly identified the culprit.

"After a thorough investigation by BBC Worldwide's Canadian broadcast partner, the source of the leak of Episode of the new Doctor Who series has been traced to a third-party company in Canada which had an early preview copy for legitimate purposes," the BBC announced.

"The individual responsible for the leak has had their employment terminated by that company as a result. BBC Worldwide is considering further legal remedies and takes extremely seriously any unlawful copying or misuse of its copyright material."

The leaker has never been named, but he or she has suddenly morphed from pirate to pioneer of television history.

The BBC recently offered an online pre-screening of its new BBC3 comedy The Mighty Boosh, which was seen by 35,000 people.

And Ms. Bennett says the BBC is now accelerating several other initiatives, including one that would see a channel's entire programming made available in cyberspace and over traditional airwaves at the same time. The TV-Internet simulcasts could be available with in a year, she told the Guardian.

"It's a great way of getting public service content, which people have already paid for, out to people in a different way."

In a related development, Canadian cellphone companies seem to think people will want to watch shows on their small, mobile screens.

Telus Mobility is pitching the initiative as way for sports fans and news junkies to watch programs on the go.

Faster wireless connections and better screens now make it possible for consumers to watch video from their handsets, already used to surf the Internet and take photos.

Mobile TV signals are sent via chips that process phone calls and streaming video, which is delivered on demand.

Caption: Christopher Eccleston, right, plays the doctor, and Billie Piper, his assistant Rose, in Doctor Who. Six months ago, a Canadian television worker leaked the pilot episode of the new series via the Internet.