Dr Who lands among a new galaxy of stars 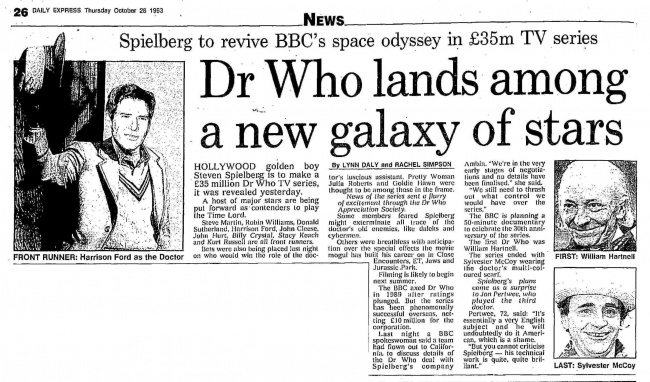 HOLLYWOOD golden boy Steven Spielberg is to make a E35 million Dr Who TV series, it was revealed yesterday.

A host of major stars are being put forward as' contenders to play (he Time Lord.

Bets were also being placed last night on who would win the role of the doctor's luscious assistant. Pretty Woman Julia Roberts and Goldie Hawn were thought to be among those in the frame. News of the series sent a flurry of excitement through the l)r Who Appreciation Society.

Some members feared Spielberg might exterminate all trace of the doctor's old enemies, like daleks and cybermen.

Others were breathless with anticipation over the special effects the movie mogul has built his career on in Close Encounters, ET, Jaws and Jurassic Park,

Filming is likely to begin next summer.

The BBC axed Dr Who in 1989 after ratings plunged. But the series has been phenomenally successful overseas, netting £10 million for the corporation.

Last night a BBC spokeswoman said a team had flown out to California to discuss details of the Dr Who deal with Spielberg's company Amble. "We're in the very early stages of negotiations and no details have been finalised," she said. "We still need to thrash out what control we would have over the series."

The BBC is planning a 50-minute documentary to celebrate the 30th anniversary of the series.

The first Dr Who was William Hartnell.

Spielberg's plans came us a surprise to Jon Pertwee, who played the third doctor.

Pertwee, 72, said: "It's essentially a very English subject and he will undoubtedly do it American, which is a shame, "But you cannot criticise Spielberg — his technical work is quite, quite brilliant."