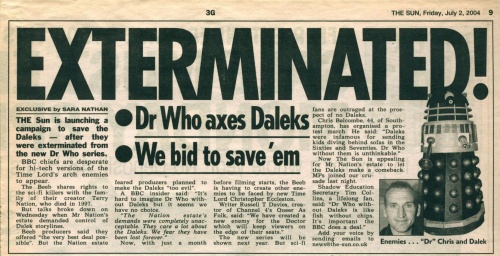 •We bid to save em

THE Sun is launching a campaign to save the Daleks — after they were exterminated from the new Dr Who series.

BBC chiefs are desperate for hi-tech versions of the Time Lord's arch enemies to appear.

The Beeb shares rights to the sci-fi killers with the family of their creator Terry Nation, who died in 1997.

But talks broke down on Wednesday when Mr Nation's estate demanded control of Dalek storylines.

Beeb producers said they offered "the very best deal possible". But the Nation estate feared producers planned to make the Daleks "too evil".

A BBC insider said: "It's hard to imagine Dr Who without Daleks but it seems we have no choice.

"The Nation estate's demands were completely unacceptable. They care a lot about the Daleks. We fear they have been lost forever."

Now, with just a month before filming starts, the Beeb is having to create other enemies to be faced by new Time Lord Christopher Eccleston.

Writer Russell T Davies, creator of Channel 4's Queer As Folk, said: "We have created a new enemy for the Doctor which will keep viewers on the edge of their seats."

The new series will be shown next year. But sci-fi fans are outraged at the prospect of no Daleks.

Chris Balcombe, 44, of Southampton, has organised a protest march. He said: "Daleks were infamous for sending kids diving behind sofas in the Sixties and Seventies. Dr Who without them is unthinkable."

Now The Sun is appealing for Mr Nation's estate to let the Daleks make a comeback. MPs joined our crusade last night.

Shadow Education Secretary Tim Collins, a lifelong fan, said: "Dr Who without Daleks is like fish without chips. It's important the BBC does a deal."

Add your voice by sending emails to news@the-sun.co.uk