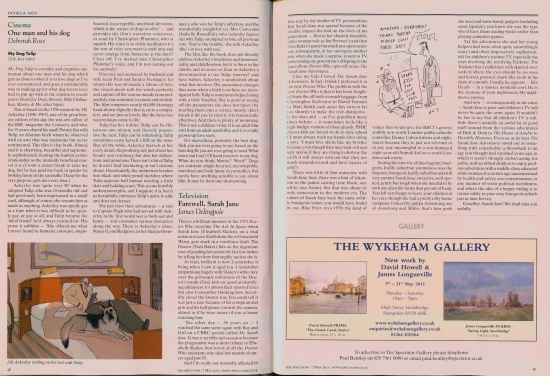 There's a brilliant moment in the 1975 Doctor Who storyline The Ark In Space when Sarah Jane (Elisabeth Sladen), on a vital mission to save Earth from the evil insectoid Wirrn, gets stuck in a ventilator shaft. The Doctor (Tom Baker) hits on the ingenious ruse of goading her across the last few inches by telling her how thoroughly useless she is.

At least, brilliant is how I remember it being when I saw it aged ten. I remember empathising hugely with Sladen's white fury over the grotesque unfairness of the Doc - tor's insults (God, kids are good at identifying unfairness: it's almost their raison d'etre) but also I remember thinking how incredibly clever the Doctor was. You could tell it was just a ruse because of his conspiratorial grin and his half glance towards the camera, almost as if he were aware of you at home watching him. The other day - 36 years on - I watched the same scene again with Boy and Girl on a CBBC special called My Sarah Jane. It was a terribly sad occasion because the programme was a short tribute to Elisabeth Sladen, best loved of all the Doctor Who assistants, who died last month of cancer aged just 65.

And I'm really not normally affected in this way by the deaths of TV personalities. But Sarah Jane was special because of the double impact she had on the lives of my generation - first in her chastely fanciable, older woman role as Jon Pertwee's and then Tom Baker's game but much put-upon assist - ant; subsequently, in her surrogate-mother role when she made a surprise return to TV, entertaining my generation's offspring in the marvellous Doctor Who spin-off series The Sarah Jane Adventures. Like my kids I loved The Sarah Jane Adventures. In fact, I think I preferred it to the new Doctor Who . The problem with the new Doctor Who is that it has been freighted from the off with so much baggage: from Christopher Eccleston to David Tennant to Matt Smith each actor has striven far too showily to make the role distinctively his own; and - as I've grumbled many times before - it sometimes feels like a high-budget version of those ghastly PSHE classes kids are forced to do at state school ('I must always wash my hands after doing a poo, ' 'I must love aliens like my brother because even though they may look evil and ugly and as if they are trying to destroy the earth it will always turn out that they are much misunderstood and have hearts of gold').

There was little of that nonsense with Sarah Jane. Sure, there was a hint of tokenism in the junior casting (one black, one white, one Asian), but that was about its only concession to the modern era. The values of Sarah Jane were the same solidly bourgeois values you would have found in, say, Blue Peter circa 1970: the kind of values that would give the BBC1's groovy, stubbly new north-London-public-schoolie controller Danny Cohen kittens and night - mares because they're just not relevant or in any way meaningful to a war-damaged eight-year-old Somali kid on a south London crack estate.

Setting the tone for all this fragrant, bourgeois, leafily suburban yumminess was the fragrant, bourgeois, leafily suburban and still very yummy Sarah Jane: attractive, well-spoken, gentle but tough when she needed to be with any alien life forms that got out of hand. You felt very happy to leave your children in her care: though she had a pretty nifty home computer (voiced by pukka Armstrong out of Armstrong and Miller: that's how posh she was) and some handy gadgets (including sonic lipstick), you knew she was the type who'd have them reading books rather than playing computer games.

Yet the adventures she and her young helpers had were often quite astonishingly scary (and often impressively sophisticated) for children's teatime TV, especially the ones involving the terrifying Trickster. The Trickster has a pallid face with skinned-over sockets where the eyes should be, no nose and horrid, pointed, shark-like teeth in his slash of a mouth. Usually, he appears - like Death - in a sinister monkish cowl. He is the creature of your nightmares. My night - mares, anyway.

And now - as unexpectedly as she came - Sarah Jane is gone and children's TV will never be quite the same again. It wouldn't be fair to say that all children's TV is rubbish: there's actually an awful lot of good stuff around from the various adventures of Dick & Dom to The House of Anubis to Horrible Histories. Even so, at its best The Sarah Jane Adventures stood out as some - thing truly remarkable: a throwback to an age you thought had vanished years ago, in which it wasn't thought embarrassing for polite, well-scrubbed children to enjoy perilous adventures with a middle-class, educated white woman of a certain age, unconstrained by health and safety, eco-consciousness, or any manner of socio-political worthiness, and where the idea of a happy ending is to return safely to your cosy bourgeois suburb just in time for tea.

Goodbye, Sarah Jane! We shall miss you awfully.