From Gay to Geek 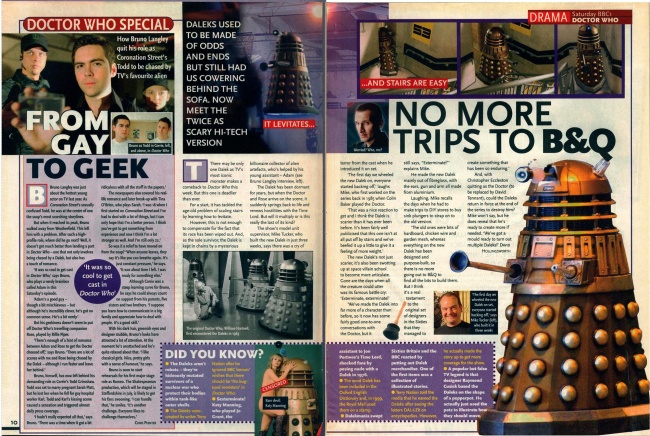 Bruno as Todd in Corrie, left, and above, in Doctor Who

Bruno Langley was just about the hottest young actor on TV last year. As Coronation Street's sexually confused Todd, he was at the centre of one the soap's most scorching storylines.

But when it reached its peak, Bruno walked away from Weatherfield. This left him with a problem. After such a high-profile role, where did he go next? Well, it doesn't get much better than landing a part in Doctor Who —one that not only involves being chased by a Dalek, but also has a touch of romance.

'It was so cool to get cast in Doctor Who,' says Bruno, who plays a nerdy brainbox called Adam in this Saturday's episode.

'Adam's a good guy —though a bit mischievous — but although he's incredibly clever, he's got no common sense. He's a bit nerdy.'

But his geekiness doesn't seem to put off Doctor Who's travelling companion Rose, played by Billie Piper.

'There's enough of a hint of romance between Adam and Rose to get the Doctor cheesed off,' says Bruno. 'There are a lot of scenes with me and Rose being chased by the Dalek — although I run faster and leave her behind.'

Bruno, himself, has now left behind his demanding role as Corrie's Todd Grimshaw. Todd was set to marry pregnant Sarah Platt, but he lost her when he fell for gay hospital worker Karl. Todd and Karl's kissing scene caused a sensation and triggered almost daily press coverage.

'I hadn't really expected all that,' says Bruno. 'There was a time when it got a bit ridiculous with all the stuff in the papers.'

The newspapers also covered his real-life romance and later break-up with Tina O'Brien, who plays Sarah. 'I was 18 when I first started on Coronation Street and I've had to deal with a lot of things, but I can only hope that I'm a better person. I think you've got to get something from experience and now I think I'm a lot stronger as well. And I'm still only 22.'

So was it a relief to have moved on from the soap? 'When anyone leaves, they say it's like you can breathe again. It's just constant pressure,' he says. 'It was about time I left. I was ready for something else.'

Although Corrie was a steep learning curve for Bruno, he says he could always count on support from his parents, five sisters and two brothers. 'I suppose you learn how to communicate in a big family and appreciate how to deal with people. It's a good skill.'

With his dark hair, greenish eyes and designer stubble, Bruno's looks have attracted a lot of attention. At the moment he's unattached and he's quite relaxed about that. 'I like classical girls. Nice, pretty girls with a sense of humour,' he says.

Bruno is soon to start rehearsals for his first major stage role as Romeo. The Shakespearean production, which will be staged in Staffordshire in July, is likely to get his fans swooning. 'I can handle that,' he smiles. 'It's another challenge. Everyone likes to challenge themselves.'

NO MORE TRIPS TO B&Q

DALEKS USED TO BE MADE OF ODDS AND ENDS BUT STILL HAD US COWERING BEHIND THE SOFA. NOW MEET THE TWICE AS SCARY HI-TECH VERSION IT LEVITATES... ...AND STAIRS ARE EASY

The original Doctor Who, William Hartnell. first encountered the Daleks in 1963

There may be only one Dalek as TV's most iconic monster makes a comeback to Doctor Who this week. But this one is deadlier than ever.

For a start, it has tackled the age-old problem of scaling stairs by learning how to levitate.

However, this is not enough to compensate for the fact that its race has been wiped out. And, as the sole survivor, the Dalek is kept in chains by a mysterious billionaire collector of alien artefacts, who's helped by his young assistant — Adam (see Bruno Langley interview, left).

The Dalek has been dormant for years, but when the Doctor and Rose arrive on the scene, it suddenly springs back to life and renews hostilities with the Time Lord. But will it multiply or is this really the last of its kind?

The show's model unit supervisor, Mike Tucker, who built the new Dalek in just three weeks, says there was a cry of terror from the cast when he introduced it on set.

The first day we wheeled the new Dalek on, everyone started backing off,' laughs Mike, who first worked on the series back in 1985 when Colin Baker played the Doctor.

'That was a nice reaction to get and I think the Dalek is scarier than it has ever been before. It's been fairly well publicised that this one isn't at all put off by stairs and we've beefed it up a little to give it a feeling of more weight.'

The new Dalek's not just scarier, it's also been swotting up at space villain school to become more articulate. Gone are the days when all the creature could utter was its famous battle cry: 'Exterminate, exterminate!'

'We've made the Dalek into far more of a character than before, so it now has some fairly good one-to-one conversations with the Doctor, but it still says, "Exterminate!" explains Mike.

He made the new Dalek mainly out of fibreglass, with the ears, gun and arm all made from aluminium.

Laughing, Mike recalls the days when he had to make trips to DIY stores to buy sink plungers to strap on to the old version.

'The old ones were bits of hardboard, chicken wire and garden mesh, whereas everything on the new Dalek has been designed and purpose-built, so

there is no more going out to B&Q to find all the bits to build them. But I think it's a real testament

to the original set of designers in the Sixties that they managed to create something that has been so enduring.'

And, with Christopher Eccleston quitting as the Doctor (to be replaced by David Tennant), could the Daleks return in force at the end of the series to destroy him? Mike won't say, but he does reveal that he's ready to create more if needed. 'We've got a mould ready to turn out multiple Daleks!'

'The first day we wheeled the new Dalek on set, everyone started backing off,' says Mike Tucker (left), who built it in three weeks