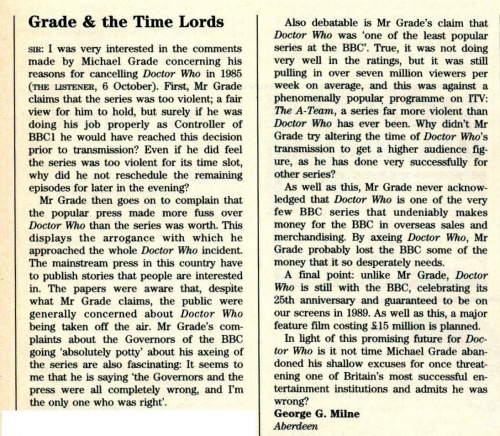 Sir: I was very interested in the comments made by Michael Grade concerning his reasons for cancelling Doctor Who in 1985 (THE LISTENER, 6 October). First, Mr Grade claims that the series was too violent; a fair view for him to hold, but surely if he was doing his job properly as Controller of BBC1 he would have reached this decision prior to transmission? Even if he did feel the series was too violent for its time slot, why did he not reschedule the remaining episodes for later in the evening?

Mr Grade then goes on to complain that the popular press made more fuss over Doctor Who than the series was worth. This displays the arrogance with which he approached the whole Doctor Who incident. The mainstream press in this country have to publish stories that people are interested in. The papers were aware that, despite what Mr Grade claims, the public were generally concerned about Doctor Who being taken off the air. Mr Grade's complaints about the Governors of the BBC going 'absolutely potty' about his axeing of the series are also fascinating: It seems to me that he is saying 'the Governors and the press were all completely wrong, and I'm the only one who was right'.

Also debatable is Mr Grade's claim that Doctor Who was 'one of the least popular series at the BBC'. True, it was not doing very well in the ratings, but it was still pulling in over seven million viewers per week on average, and this was against a phenomenally popular programme on ITV: The A-Team, a series far more violent than Doctor Who has ever been. Why didn't Mr Grade try altering the time of Doctor Who's transmission to get a higher audience figure, as he has done very successfully for other series?

As well as this, Mr Grade never acknowledged that Doctor Who is one of the very few BBC series that undeniably makes money for the BBC in overseas sales and merchandising. By axeing Doctor Who, Mr Grade probably lost the BBC some of the money that it so desperately needs.

A final point: unlike Mr Grade, Doctor Who is still with the BBC, celebrating its 25th anniversary and guaranteed to be on our screens in 1989. As well as this, a major feature film costing £15 million is planned.

In light of this promising future for Doctor Who is it not time Michael Grade abandoned his shallow excuses for once threatening one of Britain's most successful entertainment institutions and admits he was wrong?