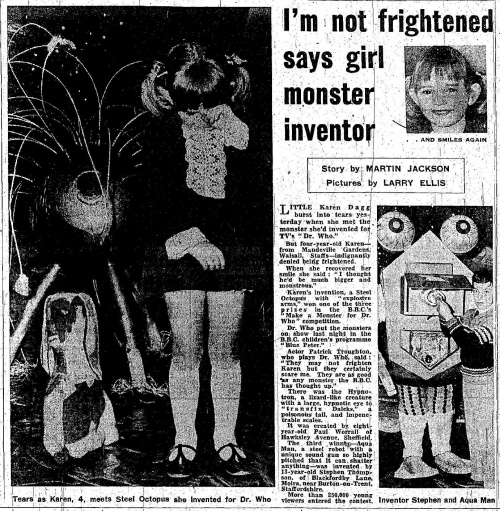 LITTLE Karen Dagg burst into tears yesterday when she met the monster she'd invented for TV's "Dr. Who."

When she recovered her smile she said : "I thought he'd be much bigger and monstrous."

Karen's invention, a Steel Octopus with "explosive arms," won one of the three prizes in the B.B.C.'s "Make a Monster for Dr. Who" competition.

Dr. Who put the monsters on show last night in the B.B.C. children's programme "Blue Peter."

Actor Patrick Troughton, who plays Dr. Who, said: "They may not frighten Karen but they certainly scare me. They are at good as any monster the B.B.C. has thought up."

There was the Hypnotron, a lizard-like creature with a large, hypnotic eye to "transfix Daleks," poisonous tail, and impenetrable scales.

It was created by eight year-old Paul Worrall of Hawksley Avenue, Sheffield.

The third winner-- Aqua Man, a steel robot with unique sound gun so highly pitched that it can shatter anything—was invented by 13-year-old Stephen Thompson, of Blackfordby Lane, Moira, near Burton-on-Trent, Staffordshire.

Tears as Karen, 4, meets Steel Octopus she invented for Dr. Who