I Investigate Dr Who 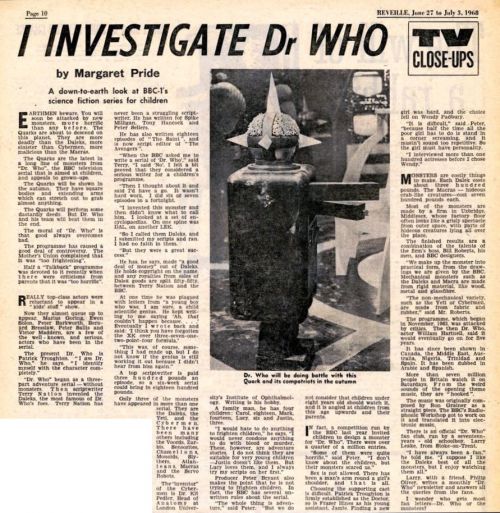 EARTHMEN beware. You will soon be attacked by new monsters, more horrific than any before. The Quarks are about to descend on this planet. They are more deadly than the Daleks, more sinister than Cybermen, more malicious than the Macras.

The Quarks are the latest In a long line of monsters from "Dr Who". the BBC television serial that is aimed at children, and appeals to grown-ups.

The Quarks will be shown to the autumn. They have square bodies and extending arms which can stretch out to grab almost anything.

The Quarks will perform some dastardly deeds. But Dr. Who and his team will beat them in the end.

The moral of "Dr. Who" is that good always overtimes bad.

The programme An caused a good deal of controversy. The Mothers Union complained that it was "too frightening".

Half a "Talkback" programme was devoted to it recently when there were criticisms from parents that it was "too horrific".

REALLY top-class actors were reluctant to appear in a "kids' stuff" show.

Now they almost queue up to appear. Marius Goring, Ewen Solon, Peter Barkworth, Bernard Bresslaw, Peter Sallis and Victor Maddern, are a few of the well-known and serious actors who have been in the serial.

The present Dr. Who is Patrick Troughton "I am Dr. Who." he says "I Identify myself with the character completely"

"Dr. Who" began as a three-part adventure serial -- without monsters. Then scriptwriter Terry Nation invented the Daleks, the most famous of Dr. Who's foes. Terry Nation has never been a struggling script writer. He has written for Spike Milligan, Tony Hancock and Peter Sellers.

He has also written eighteen episodes of "The Saint", and is now script editor of "The Avengers".

"When the BBC asked me to write a serial of 'Dr. Who'," said Terry, "I said 'No'. I felt a bit peeved that they considered a serious writer for a children's programme.

"Then I thought about it and said I'd have a go. It wasn't hard work. I did six or seven episodes in a fortnight.

"I invented this monster and then didn't know what to call him. I looked at a set of encyclopaedias. On one spine was DAL on another LEK.

"So I called them Daleks and I submitted my scripts and ran I had no faith In them.

"But they were a great success."

He has, he says, made "a good deal of money out of Daleks. He holds copyright on the name and any royalties from sales of Daleks goods are split fifty-fifty, between Terry Nation and the BBC.

At one time he was plagued with letters from 'a young boy who was, I am sure, a child scientific genius. He kept writing to me saying 'that couldn't happen because ....' Eventually I wrote back and said: 'I think you have forgotten the XK over three-seven-one two-point-four formula.'

'This was, of course, something I had made up, but I do not know if the genius is still working it out because I didn't hear from him again."

Only three of the monsters have appeared in more than one serial. They are the Daleks, the Yeti and the Cybermen. There have been many other, including the Voords, Zarbis, Sensorites, Chamelions, Monoids, Slythers, Atlanteans, Macras and the Servo Robots.

The "inventor" of the Cybermen is Dr. Kit Pedler, Head of Anatomy at London University's Institute of Ophthalmology. Writing is his hobby.

"I would hate to do anything to frighten children," he says. "I would never condone anything to do with blood or murder. These, however, are adventure stories I do not think they are suitable for very young children --Justin doesn't like them, But Lucy loves them, and I always try my scripts on her first."

Producer Peter Bryant also makes the point that he is not trying to frighten children. In fact, the BBC has several unwritten rules about the serial.

"The whole thing is adventure?" said Peter. "But we do not consider that children under eight years old should watch it, and it is angled at children from this age upwards and their parents.

IN fact, a competition run by the BBC last year invited children to design a monster for "Dr Who". There were over a quarter of a million entries.

"Some of them were quite horrific," said Peter. "I don't know about the children, but their monsters scared us."

Sex to not allowed. There has been a man's around a girl's shoulder, and that is all.

Choosing the supporting cast is difficult. Patrick Troughton is firmly established as the Doctor, so is Fraser Hines as hiss young assistant, Jamie. Finding a new girl was hard, and the choice fell on Wendy Padbury.

"It is difficult," said Peter, "because half the time all the poor girl has to do is stand in a corner screaming, and it mustn't sound too repetitive. So the girl must have personality.

"I interviewed more than one hundred actresses before I chose Wendy."

MONSTERS are costly things to make. Each Dalek costs about three hundred pound. The Macras — hideous crab like creatures—cost seven hundred pounds each.

Most of the monsters are made by a firm in Uxbridge, Middlesex, whose factory floor often looks like a grisly spectacle from outer space, with parts of hideous creatures lying all over the place.

The finished results are a combination of the talents of the firm's boss, Bill Roberts, his men, and BBC designers.

"We make up the monster into practical form, from the drawings we are given by the BBC. Mechanical monster such as the Daleks and Macra are made from rigid material, like wood, metal and glassfibre.

"The non-mechanical variety, such as the Yeti or Cybermen, are made from fabric and rubber," said Mr. Roberts.

The programme, which began in November 1963, was attacked by critics. The then Dr. Who, actor William Hartnell said it would eventually go on for five years.

It has since been shown in Canada, the Middle East Australia, Nigeria, Trinidad and Spain. It has been dubbed in Arabic and Spanish.

More than seven million people in Britain watch it on Saturday. Prom the weird sounds of the opening theme music, they are "hooked".

The music was originally composed by Ron Grainer as a straight piece. The BBC's Radiophonic Workshop got to work on it and translated it into electronic music.

There is an official "Dr. Who" fan club, run by a seventeen-years-old schoolboy, Larry Leake, from Stoke-on-Trent.

"I have always been a fan." he told me "I suppose I like the Daleks best of all the monsters but I enjoy watching them all."

Larry, with a friend, Philip Oliver, writes a monthly "Dr. Who" newsletter and answers all the queries from the fans.

I wonder who gets most fan letter—Dr. Who or the monsters?

Caption: Dr. Who will be doing battle with this Quark and its compatriots in the autumn