Is the next Dr. Who a student at Purdue? 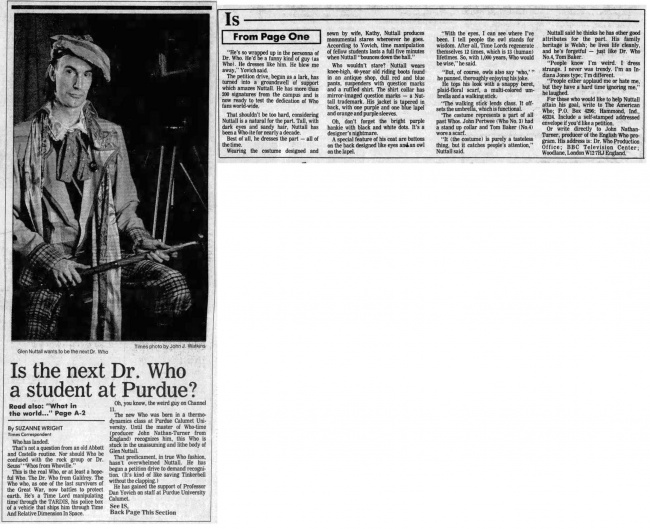 That's not a question from an old Abbott and Costello routine. Nor should Who be confused with the rock group or Dr. Seuss' "Whos from Whoville."

This is the real Who, or at least a hopeful Who. The Dr. Who from Galifrey. The Who who, as one of the last survivors of the Great War, now battles to protect earth. He's a Time Lord manipulating time through the TARDIS, his police box of a vehicle that ships him through Time And Relative Dimension In Space.

The new Who was born in a thermodynamics class at Purdue Calumet University. Until the master of Who-time (producer John Nathan-Turner from England) recognizes him, this Who is stuck in the unassuming and lithe body of Glen Nuttall.

That predicament, in true Who fashion, hasn't overwhelmed Nuttall. He has begun a petition drive to demand recognition. (It's kind of like saving Tinkerbell without the clapping.)

He has gained the support of Professor Dan Yovich on staff at Purdue University Calumet.

"He's so wrapped up in the personna of Dr. Who. He'd be a funny kind of guy (as Who). He dresses like him. He blew me away," Yovich said.

The petition drive, begun as a lark, has turned into a groundswell of support which amazes Nuttall. He has more than 200 signatures from the campus and is now ready to test the dedication of Who fans world-wide.

That shouldn't be too hard, considering Nuttall is a natural for the part. Tall, with dark eyes and sandy hair. Nuttall has been a Who-ite for nearly a decade.

Best of all, he dresses the part — all of the time.

Wearing the costume designed and sewn by wife, Kathy, Nuttall produces monumental stares whereever he goes. According to Yovich, time manipulation of fellow students lasts a full five minutes when Nuttall "bounces down the hall."

Who wouldn't stare? Nuttall wears knee-high, 40-year old riding boots found in an antique shop, dull red and blue pants, suspenders with question marks and a ruffled shirt. The shirt collar has mirror-imaged question marks — a Nut-tall trademark. His jacket is tapered in back, with one purple and one blue lapel and orange and purple sleeves.

Oh, don't forget the bright purple hankie with black and white dots. It's a designer's nightmare.

A special feature of his coat are buttons on the back designed like eyes ancian owl on the lapel.

"With the eyes, I can see where I've been. I tell people the owl stands for wisdom. After all, Time Lords regenerate themselves 12 times, which is 13 (human) lifetimes. So, with 1,000 years, Who would be wise," he said.

"But, of course, owls also say 'who,'" he punned, thoroughly enjoying his joke.

He tops his look with a snappy beret, plaid-floral scarf, a multi-colored umbrella and a walking stick.

"The walking stick lends class. It offsets the umbrella, which is functional.

'The costume represents a part of all past Whos. John Pertwee (Who No. 3) had a stand up collar and Tom Baker (No.4) wore a scarf.

"It (the costume) is purely a tasteless thing, but it catches people's attention," Nuttall said.

Nuttall said he thinks he has other good attributes for the part. His family heritage is Welsh; he lives life cleanly, and he's forgetful — just like Dr. Who No.4, Tom Baker.

"People either applaud me or hate me, but they have a hard time ignoring me," he laughed.

For those who would like to help Nuttall attain his goal, write to The American Who; P.O. Box 4296; Hammond, Ind., 46324. Include a self-stamped addressed envelope if you'd like a petition.