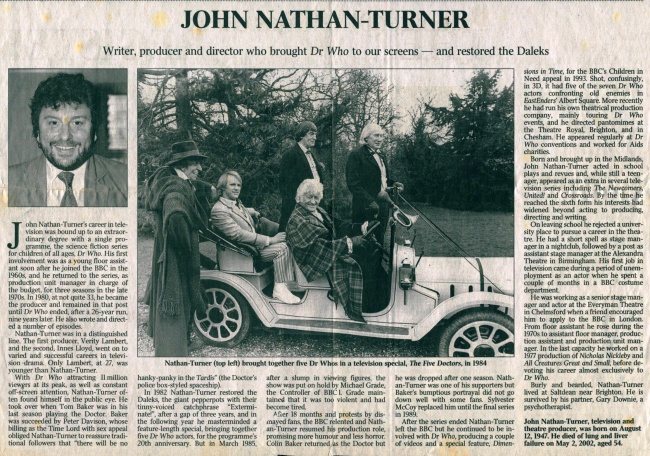 Writer, producer and director who brought Dr Who to our screens - and restored the Daleks

John Nathan-Turner's career in television was bound up to an extraordinary degree with a single programme, the science fiction series for children of all ages, Dr Who. His first involvement was as a young floor assistant soon after he joined the BBC in the 1960s, and he returned to the series, as production unit manager in charge of the budget, for three seasons in the late 1970s. In 1980, at not quite 33, he became the producer and remained in that post until Dr Who ended, after a 26-year run, nine years later. He also wrote and directed a number of episodes.

Nathan-Turner was in a distinguished line. The first producer, Verity Lambert, and the second, Innes Lloyd, went on to varied and successful careers in television drama. Only Lambert, at 27, was younger than Nathan-Turner.

With Dr Who attracting 11 million viewers at its peak, as well as constant off-screen attention, Nathan-Turner often found himself in the public eye. He took over when Tom Baker was in his last season playing the Doctor. Baker was succeeded by Peter Davison, whose billing as the Time Lord with sex appeal obliged Nathan-Turner to reassure traditional followers that "there will be no hanky panky in the Tardis" (the Doctor's police box-styled spaceship).

In 1982 Nathan-Turner restored the Daleks, the giant pepperpots with their tinny-voiced catchphrase "Exterminate!", after a gap of three years, and in the following year he masterminded a feature-length special, bringing together five Dr Who actors, for the programme's 20th anniversary. But in March 1985, after a slump in viewing figures, the show was put on hold by Michael Grade, the Controller of BBC 1. Grade maintained that it was too violent and had become tired.

After 18 months and protests by dismayed fans, the BBC relented and Nathan Turner resumed his production role, promising more humour and less horror. Colin Baker returned as the Doctor but he was dropped after one season. Nathan-Turner was one of his supporters but Baker's bumptious portrayal did not go down well with some fans. Sylvester McCoy replaced him until the final series in 1989.

After the series ended Nathan-Turner left the BBC but he continued to be involved with Dr Who, producing a couple of videos and a special feature, Dimensions in Time, for the BBC's Children in Need appeal in 1993. Shot, confusingly, in 3D, it had five of the seven Dr Who actors confronting old enemies in EastEnders' Albert Square. More recently he had run his own theatrical production company, mainly touring Dr Who events, and he directed pantomimes at the Theatre Royal, Brighton, and in Chesham. He appeared regularly at Dr Who conventions and worked for Aids charities.

Born and brought up in the Midlands, John Nathan-Turner acted in school plays and revues and, while still a teenager, appeared as an extra in several television series including The Newcomers, United! and Crossroads. By the time he reached the sixth form his interests had widened beyond acting to producing, directing and writing.

On leaving school he rejected a university place to pursue a career in the theatre. He had a short spell as stage manager in a nightclub, followed by a post as assistant stage manager at the Alexandra Theatre in Birmingham. His first job in television came during a period of unemployment as an actor when he spent a couple of months in a BBC costume department.

He was working as a senior stage manager and actor at the Everyman Theatre in Chelmsford when a friend encouraged him to apply to the BBC in London. From floor assistant he rose during the 1970s to assistant floor manager, production assistant and production unit manager. In the last capacity he worked on a 1977 production of Nicholas Nickleby and All Creatures Great and Small, before devoting his career almost exclusively to Dr Who.

Burly and bearded, Nathan-Turner lived at Saltdean near Brighton. He is survived by his partner, Gary Downie, a psychotherapist.