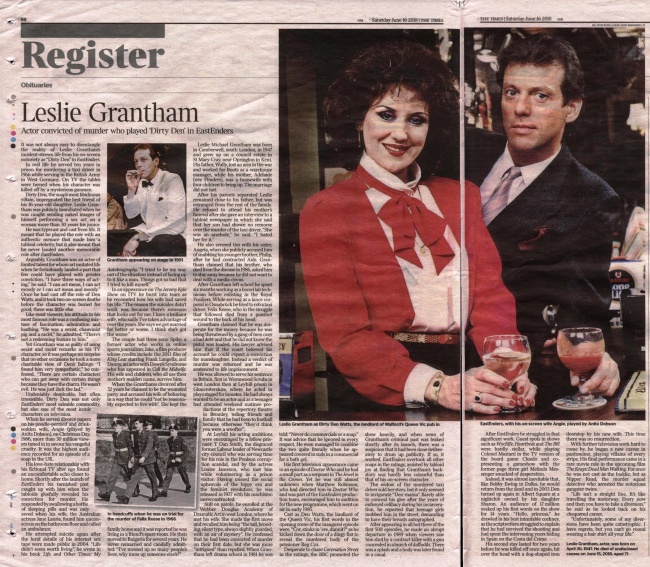 Actor convicted of murder who played 'Dirty Den' in EastEnders

It was not always easy to disentangle the reality of Leslie Grantham's incident-strewn life from his on-screen notoriety as "Dirty Den" in EastEnders.

In real life he served ten years in prison for murdering a taxi driver in 1966 while serving in the British Army in West Germany. On TV the tables were turned when his character was killed off by a mysterious gunman.

Dirty Den, the soap's most libidinous villain, impregnated the best friend of his 16-year-old daughter. Leslie Grantham was publicly humiliated when he was caught sending naked images of himself performing a sex act on a woman more than 30 years his junior.

He was typecast and cast from life. It meant that he played the role with an authentic menace that made him a tabloid celebrity, but it also meant that he never landed another memorable role after EastEnders.

Arguably, Grantham was an actor of limited talent for whom art imitated life when he fortuitously landed a part that few could have played with greater conviction. "I have three ways of acting," he said. "I can act mean, I can act moody or I can act mean and moody." Once he had cast off the role of Den Watts, and it took two on-screen deaths before the character was buried for good, there was little else.

Like most viewers, his attitude to his most famous role was a confusing mixture of fascination, admiration and loathing. "He was a sexist, chauvinist pig and a racist: he admitted. "There's not a redeeming feature to him."

Yet Grantham was as guilty of using sexist and racist remarks as his TV character, so it was perhaps no surprise that on other occasions he took a more charitable view of Den's failings. "I found him very sympathetic; he confessed. "There are certain characters who can get away with certain things because they have the charm. He wasn't evil. He was just Jack the lad."

Undeniably despicable, but often irresistible, Dirty Den was not only EastEnders' most saleable commodity, but also one of the most iconic characters on television.

When he served divorce papers on his poodle-permed and drink-sodden wife, Angie (played by Anita Dobson), on Christmas Day, 1986, more than 30 million viewers tuned in to savour his vengeful cruelty. It was the highest audience recorded for an episode of a soap in the UK.

His love-hate relationship with his fictional TV alter ego found an uncomfortable echo closer to home. Shortly after the launch of EastEnders his tarnished past caught up with him when the tabloids gleefully revealed his conviction for murder. He responded by swallowing a bottle of sleeping pills and was only saved when his wife, the Australian actress Jane Laurie, found him unconscious on the bathroom floor and called an ambulance.

He attempted suicide again after the lurid details of his internet sex tape were made public in 2004. "Life didn't seem worth living", he wrote in his book Life and Other Times: My Autobiography. "I tried to lie my way out of the situation instead of facing up to it like a man. Things got so bad that I tried to kill myself."

In an appearance on The Jeremy Kyle Show on ITV he burst into tears as he recounted how his wife had saved his life: "The reason the suicides didn't work was because there's someone that looks out for me. l have a brilliant wife, who sadly I've taken advantage of over the years. She says we got married for better or worse. I think she's got the worse."

The couple had three sons: Spike, a former actor who works in online sports journalism; Jake, a film producer whose credits include the 2013 film of King Lear starring Frank Langella; and Danny, an actor with Down's Syndrome who has appeared in Call the Midwife. His wife and children, who all use their mother's maiden name, survive him.

When the Granthams divorced after 32 years he claimed to be the wounded party and accused his wife of behaving in a way that he could "not be reasonably expected to live with". She kept the family home and it was reported he was living in a friend's spare room. He then moved to Bulgaria for several years. He never remarried and candidly admitted: "I've messed up so many people's lives, why mess up someone else's?"

Leslie Michael Grantham was born in Camberwell, south London, in 1947 and grew up on a council estate in St Mary Cray, near Oprington in Kent. His father, Wally, lost an arm in the war and worked for Boots as a warehouse manager, while his mother, Adelaide (nee Flinders), was a housewife with four children to bring up. The marriage did not last.

After his parents separated Leslie remained close to his father, but was estranged from the rest of the family. He refused to attend his mother's funeral after she gave an interview to a tabloid newspaper in which she said that her son had shown no remorse over the murder of the taxi driver. "She was an arsehole," he said. "I hated her for it

He also severed ties with his sister, Angela, when she publicly accused him of snubbing his younger brother, Philip, after he had contracted Aids. Grantham claimed that his brother, who died from the disease in 1986, asked him to stay away because he did not want to deal with a media circus.

After Grantham left school he spent six months working as a bored lab technician before enlisting in the Royal Fusiliers. While serving as a lance corporal in Osnabruck he tried to rob a taxi driver, Felix Reese, who in the struggle that followed died from a gunshot wound to the back of his head.

Grantham claimed that he was desperate for the money because he was being threatened by a gang of men over a bad debt and that he did not know the pistol was loaded. His lawyer advised him that if the court believed his account he could expect a conviction for manslaughter. Instead a verdict of murder was returned and he was sentenced to life imprisonment.

He was allowed to serve his sentence in Britain, first in Wormwood Scrubs in west London then at Leyhill prison in Gloucestershire, where he acted in plays staged for inmates. He had always wanted to be an actor and as a teenager had attended weekend matinee productions at the repertory theatre in Bromley, telling friends and family that he had been to football because otherwise "they'd think you were a woofter".

At Leyhill his acting ambitions were encouraged by a fellow prisoner, T Dan Smith, the disgraced former Labour leader of Newcastle city council who was serving time for his role in the Poulson corruption scandal, and by the actress Louise Jameson, who met him while volunteering as a prison visitor. Having missed the social upheavals of the hippy era and the feminist revolution, he was released in 1977 with his machismo unreconstructed.

Still on parole, he enrolled at the Webber Douglas Academy of Dramatic Art in west London, where he met his wife. She made the first move and recalled him being "the tall, brooding, silent type, always slightly guarded, with an air of mystery". He confessed that he had been convicted of murder on their first date, but she was more "intrigued" than repelled. When Grantham left drama school in 1981 he was told: "Never do commercials or a soap." It was advice that he ignored in every respect. He even managed to combine the two quite literally when he appeared covered in suds in a commercial for a bath gel.

His first television appearance came in an episode of Doctor Who and he had a small part as a sergeant in The Jewel in the Crown. Yet he was still almost unknown when Matthew Robinson, who had directed him in Doctor Who and was part of the EastEnders production team, encouraged him to audition for the new programme, which went on air in early 1985.

Cast as Den Watts, the landlord of the Queen Vic, his first words in the opening scene of the inaugural episode were, "Cor, stinks in 'ere, dunnit?" as he kicked down the door of a dingy flat to reveal the murdered body of the pensioner Reg Cox.

Desperate to chase Coronation Street in the ratings, the BBC promoted the show heavily, and when news of Grantham's criminal past was leaked shortly after its launch, there was a suspicion that it had been done deliberately to drum up publicity. If so, it worked. EastEnders overtook all other soaps in the ratings, assisted by tabloid joy at finding that Grantham's back-story was hardly less colourful than that of his on-screen character.

The widow of the murdered taxi driver sold her story, but it only seemed to invigorate "Den-mania". Barely able to conceal his glee after the years of enforced celibacy during his incarceration, he reported that teenage girls mobbed him in the street, demanding to have their breasts autographed.

After appearing in all but three of the first 508 episodes, he made an abrupt departure in 1989 when viewers saw him shot by a contract killer with a gun concealed in a bunch of daffodils. There was a splash and a body was later found in a canal.

After EastEnders he struggled to find significant work. Guest spots in shows such as Wycliffe, Heartbeat and The Bill were hardly stellar, while playing Colonel Mustard in the TV version of the board game Cluedo and co-presenting a gameshow with the former page three girl Melinda Messenger smacked of desperation.

Indeed, it was almost inevitable that, like Bobby Ewing in Dallas, he would return from the dead and in 2003 Den turned up again in Albert Square at a nightclub owned by his daughter Sharon. An audience of 17 million soaked up his first words on the show for 14 years. "Hello, princess," he drawled in his best inimitable cockney, as the scriptwriters struggled to explain that he had survived the shooting and had spent the intervening years hiding in Spain on the Costa del Crime.

His second stay lasted for two years before he was killed off once again, hit over the head with a dog-shaped iron doorstop by his new wife. This time there was no resurrection.

With further television work hard to come by, he began a new career in pantomime, playing villains of every stripe. His final performance came in a rare movie role in the upcoming film The Krays: Dead Man Walking. For once he was not cast as the baddie, but as Nipper Read, the murder squad detective who arrested the notorious gangster twins.

"Life isn't a straight line. It's like travelling the motorway. Every now and then you have to take a diversion," he said as he looked back on his chequered career.

"Unfortunately, some of my diversions have been quite catastrophic. I have regrets, but you can't go round wearing a hair shirt all your life."

EastEnders, with his on-screen wife Angie, played by Anita Dobson

Grantham appearing on stage in 1991