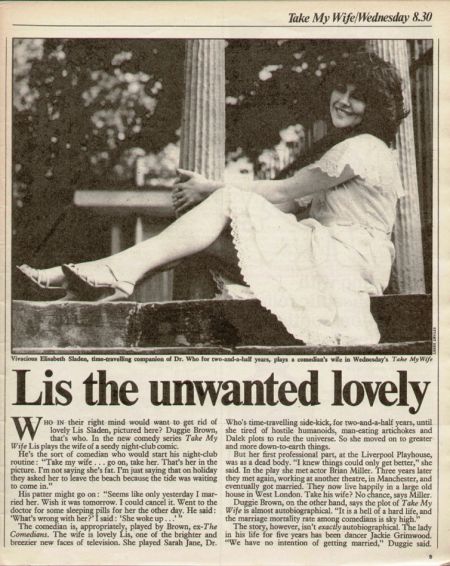 Vivacious Elisabeth Sladen, time-travelling companion of Dr. Who for two-and-a-half years, plays a comedian's wife in Wednesday's Take My Wife

WHO IN their right mind would want to get rid of lovely Lis Sladen, pictured here? Duggie Brown, that's who. In the new comedy series Take My Wife Lis plays the wife of a seedy night-club comic.

He's the sort of comedian who would start his night-club routine : "Take my wife ... go on, take her. That's her in the picture. I'm not saying she's fat. I'm just saying that on holiday they asked her to leave the beach because the tide was waiting to come in."

His patter might go on : "Seems like only yesterday I married her. Wish it was tomorrow. I could cancel it. Went to the doctor for some sleeping pills for her the other day. He said : 'What's wrong with her?' I said : 'She woke up ...' "

The comedian is, appropriately, played by Brown, ex-The Comedians. The wife is lovely Lis, one of the brighter and breezier new faces of television. She played Sarah Jane, Dr.

Who's time-travelling side-kick, for two-and-a-half years, until she tired of hostile humanoids, man-eating artichokes and Dalek plots to rule the universe. So she moved on to greater and more down-to-earth things.

But her first professional part, at the Liverpool Playhouse, was as a dead body. "I knew things could only get better," she said. In the play she met actor Brian Miller. Three years later they met again, working at another theatre, in Manchester, and eventually got married. They now live happily in a large old house in West London. Take his wife? No chance, says Miller.

Duggie Brown, on the other hand, says the plot of Take My Wife is almost autobiographical. "It is a hell of a hard life, and the marriage mortality rate among comedians is sky high."

The story, however, isn't exactly autobiographical. The lady in his life for five years has been dancer Jackie Grimwood. "We have no intention of getting married," Duggie said.