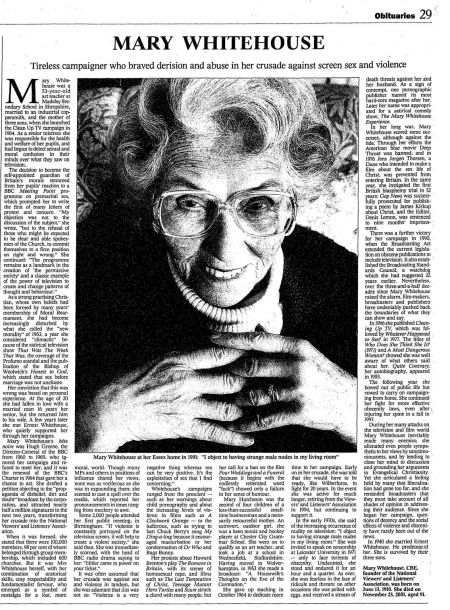 Mary Whitehouse was a 53-year-old art teacher at Madeley Secondary School in Shropshire, married to an industrial coppersmith, and the mother of three sons, when she launched the Clean Up TV campaign in 1964. As a senior mistress she was responsible for the health and welfare of her pupils, and had begun to detect sexual and moral confusion in their minds over what they saw on television.

The decision to become the self-appointed guardian of Britain's morals stemmed from her pupils' reaction to a BBC Meeting Point programme on premarital sex, which prompted her to write the first of many letters of protest and concern. "My objection was not to the discussion of the subject," she wrote, "but to the refusal of those who might be expected to be clear and able spokesmen of the Church, to commit themselves to a firm position on right and wrong." She continued: "The programme remains as a landmark in the creation of the permissive society' and a classic example of the power of television to create and change patterns of thought and behaviour."

As a strong practising Christian, whose own beliefs had been formed by many years' membership of Moral Rearmament, she had become increasingly disturbed by what she called the "new morality" of 1963, a year she considered "climactic" because of the satirical television show That Was The Week That Was, the coverage of the Profumo scandal and the publication of the Bishop of Woolwich's Honest to God, which stated that sex before marriage was not unchaste.

Her conviction that this was wrong was based on personal experience. At the age. of 20 she had fallen in love with a married man 16 years her senior, but she returned him to his wife. A few years later she met Ernest Whitehouse, who quietly supported her through her campaigns.

Mary Whitehouse's bête noire was Hugh Greene, the Director-General of the BBC from 1960 to 1969, who ignored her campaign and refused to meet her, and it was the renewal of the BBC's Charter in 1964 that gave her a chance to act. She drafted a petition objecting to the "propaganda of disbelief, dirt and doubt" broadcast by the corporation, and attracted nearly half a million signatures in the next two years, transforming her crusade into the National Viewers' and Listeners' Association.

When it was formed, she stated that there were 100,000 members, 98 per cent of whom belonged through group membership, which included 600 churches. But it was Mrs Whitehouse herself, with her combination of oratorical skills, cosy respectability and fundamentalist fervour, who emerged as a symbol of nostalgia for a lost, more moral, world: Though many MPs and others in positions of influence shared her views, none was as vociferous as she was in expounding them; she seemed to cast a spell over the media, which reported her pronouncements in tones ranging from mockery to awe.

Some 2,000 people attended her first public meeting, in Birmingham. "If violence is constantly portrayed on the television screen, it will help to create a violent society," she said then. She was immediately scorned, with the head of BBC radio drama saying to her: "Hitler came to power on your ticket."

It was often assumed that her crusade was against sex and violence in tandem, but she was adamant that this was not so: "Violence is a very negative thing whereas sex can be very positive. It's the exploitation of sex that I find concerning."

Her protests about Howard Brenton's play The Romans in Britain, with its scenes of homosexual rape, and films such as The Last Temptation of Christ, Teenage Mutant Hero Turtles and Scum struck a chord with many people, but her call for a ban on the film Four Weddings and a Funeral (because it begins with the endlessly reiterated word "fuck") showed only a failure in her sense of humour.

Mary Hutcheson was the second of four children of a less-than-successful small-time businessman and a necessarily resourceful mother. An extrovert, outdoor girl, she was a keen tennis and hockey player at Chester City Grammar School. She went on to qualify as an art teacher, and took a job at a school in Wednesfield, Staffordshire.

Having moved to Wolverhampton, in 1953 she made a broadcast: "A Housewife's Thoughts on the Eve of the Coronation."

She gave up teaching in October 1964 to dedicate more time to her campaign. Early on in her crusade, she was told that she would have to be ready, like Wilberforce, to fight for 20 years. In the event she was active for much longer, retiring from the Viewers' and Listeners' Association in 1994, but continuing to support it.

In the early 1970s, she said of the increasing occurrence of nudity on television: "1 object to having strange male nudes in my living room." She was invited to speak on censorship at Leicester University in 1971 — only to face torrents of obscenity. Undaunted, she stood and endured it for an hour and a quarter. As ever, she was fearless in the face of ridicule and threats: on other occasions she was pelted with eggs, and received a stream of death threats against her and her husband. As a sign of contempt, one pornographic publisher named its most hard-core magazine after her. Later her name was appropriated for a satirical comedy show, The Mary Whitehouse Experience.

In her long war, Mary Whitehouse scored some successes, although against the tide. Through her efforts the American blue movie Deep Throat was banned; and in 1976 Jens Jorgen Thorsen, a Dane who intended to make a film about the sex life of Christ, was prevented from entering Britain. In the same year, she instigated the first British blasphemy trial in 52 years: Gay News was successfully prosecuted for publishing a poem by James Kirkup about Christ, and the Editor, Denis Lemon, was sentenced to nine months'. imprisonment.

There was a further victory for her campaign in 1990, when the Broadcasting Act extended the current legislation on obscene publications to include television. It also established the Broadcasting Standards Council, a watchdog which she had suggested 22 years earlier. Nevertheless, over the three-and-a-half decades since Mary Whitehouse raised the alarm, film-makers, broadcasters and publishers have undeniably pushed back the boundaries of what they can show and say.

In 1966 she published Cleaning Up TV, which was followed by Whatever Happened to Sex? in 1977. The titles of Who Does She Think She Is? (1971) and A Most Dangerous Woman? showed she was well aware of what others said about her. Quite Contrary, her autobiography, appeared in 1993.

The following year she bowed out of public life but vowed to carry on campaigning from home. She continued her fight for more effective obscenity laws, even after injuring her spine in a fall in 1997.

During her many attacks on the television and film world Mary Whitehouse inevitably made many enemies; she alienated even people sympathetic to her views by sanctimoniousness, and by tending to close her mind to discussion and grounding her arguments in Evangelical Christianity. Yet she articulated a feeling held by many that liberalisation had gone too far, and she reminded broadcasters that they must take account of all shades of opinion in addressing their audience. Since she began her campaign, questions of decency and the social effects of violence and obscenity have rarely been out of the news.

In 1940 she married Ernest Whitehouse. He predeceased her. She is survived by their three sons.

Caption: Mary Whitehouse at her Essex home in 1991: "I object to having strange male nudes in my living room"