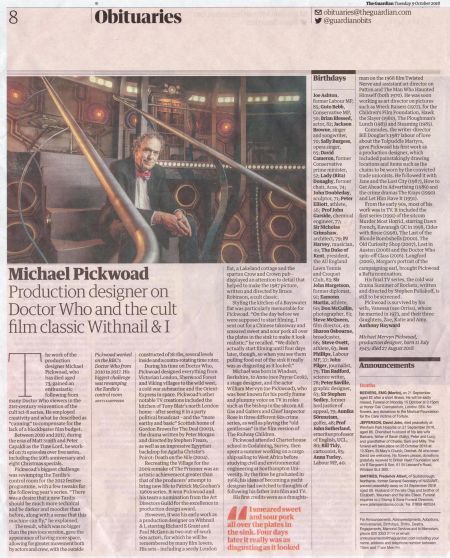 Pickwoad worked on the BBC's Doctor Who from 2010 t02017. His biggest challenge was revamping the Tardis's control room

The work of the production designer Michael Pickwoad, who has died aged 73, gained an enthusiastic following from many Doctor Who viewers in the 21st-century reinvention of the cult sci-fi series. He employed creativity and what he described as "cunning" to compensate for the lack of a blockbuster film budget.

Between 2010 and 2017, during the eras of Matt Smith and Peter Capaldi as the Time Lord, he worked on 71 episodes over five series, including the 50th anniversary and eight Christmas specials.

Pickwoad's biggest challenge was revamping the Tardis's control room for the 2012 festive programme, with a few tweaks for the following year's series. "There was a desire that a new Tardis should be much more technical and be darker and moodier than before, along with a sense that this machine can fly," he explained.

The result, which was no bigger than the previous version, gave the appearance of having more space, allowing for greater movement both by actors and crew, with the outside constructed of18 ribs, several levels inside and a contra-rotating time rotor.

During his time on Doctor Who, Pickwoad designed everything from Victorian London, Sherwood Forest and Viking villages to the wild west, a cold war submarine and the Orient-Express in space. Pickwoad's other notable TV creations included the kitchen of Tony Blair's north London home - after seeing it in a party political broadcast - and the "more earthy and basic" Scottish home of Gordon Brown for The Deal (2003), the drama written by Peter Morgan and directed by Stephen Frears, as well as an impressive Egyptian backdrop for Agatha Christie's Poirot: Death on the Nile (2004).

Recreating the Village for the 2009 remake of The Prisoner was an artistic achievement greater than that of the producers' attempt to bring new life to Patrick McGoohan's 1960s series. It won Pickwoad and his team a nomination from the Art Directors Guild for the excellence in production design award.

However, it was his early work as a production designer on Withnail & I, starring Richard E Grant and Paul McGann as two out-of-work 60s actors, for which he will be remembered by many film lovers. His sets - including a seedy London flat, a Lakeland cottage and the spartan Crow and Crown pub displayed an attention to detail that helped to make the 1987 picture, written and directed by Bruce Robinson, a cult classic.

Styling the kitchen of a Bayswater flat was particularly memorable for Pickwoad. "On the day before we were supposed to start filming, I sent out for a Chinese takeaway and smeared sweet and sour pork all over the plates in the sink to make it look realistic," he recalled. "We didn't actually start filming until four days later, though, so when you see them pulling food out of the sink it really was as disgusting as it looked."

Michael was born in Windsor, Berkshire, to Anne (nee Payne Cook), a stage designer, and the actor William Mervyn (ne Pickwoad), who was best known for his portly frame and plummy voice on TV in roles such as the bishop in the sitcom All Gas and Gaiters and Chief Inspector Rose in three different 60s crime series, as well as playing the "old gentleman" in the film version of The Railway Children.

Pickwoad attended Charterhouse school in Godalming, Surrey, then spent a summer working on a cargo ship sailing to West Africa before studying civil and environmental engineering at Southampton University. By the time he graduated in 1966, his ideas of becoming a yacht designer had switched to thoughts of following his father into film and TV.

His first credits were as a draughtsman on the 1968 film Twisted Nerve and assistant art director on Patton and The Man Who Haunted Himself (both 1970). He was soon working as art director on pictures such as Wreck Raisers (1972), for the Children's Film Foundation, Hawk the Slayer (1980), The Ploughman's Lunch (1983) and Steaming (1985).

Comrades, the writer-director Bill Douglas's 1987 labour of love about the Tolpuddle Martyrs, gave Pickwoad his first work as a production designer, which included painstakingly drawing locations and items such as the chains to be worn by the convicted trade unionists. He followed it with Jane and the Lost City (1987), How to Get Ahead in Advertising (1989) and the crime dramas The Krays (1990) and Let Him Have It (1991).

His final TV series, the cold war drama Summer of Rockets, written and directed by Stephen Poliakoff, is still to be screened.

Pickwoad is survived by his wife, Vanessa (nee Orriss), whom he married in 1973, and their three daughters, Zoe, Katie and Amy. Anthony Hayward