Mum & I were so close 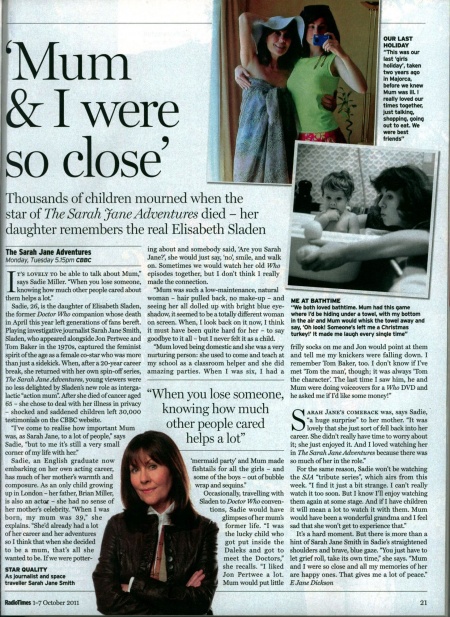 IT'S LOVELY TO be able to talk about Mum," says Sadie Miller. "When you lose someone, knowing how much other people cared about them helps a lot."

Sadie, 26, is the daughter of Elisabeth Sladen, the former Doctor Who companion whose death in April this year left generations of fans bereft. Playing investigative journalist Sarah Jane Smith, Sladen, who appeared alongside Jon Pertwee and Tom Baker in the 1970s, captured the feminist spirit of the age as a female co-star who was more than just a sidekick. When, after a 20-year career break, she returned with her own spin-off series, The Sarah Jane Adventures, young viewers were no less delighted by Sladen's new role as intergalactic "action mum". After she died of cancer aged 65 - she chose to deal with her illness in privacy - shocked and saddened children left 30,000 testimonials on the CBBC website.

"I've come to realise how important Mum was, as Sarah Jane, to a lot of people," says Sadie, "but to me it's still a very small corner of my life with her."

Sadie, an English graduate now embarking on her own acting career, has much of her mother's warmth and composure. As an only child growing up in London - her father, Brian Miller, is also an actor - she had no sense of her mother's celebrity. "When I was born, my mum was 39," she explains. "She'd already had a lot of her career and her adventures so I think that when she decided to be a mum, that's all she wanted to be. If we were pottering about and somebody said, 'Are you Sarah Jane?, she would just say, 'no, smile, and walk on. Sometimes we would watch her old Who episodes together, but I don't think I really made the connection.

"Mum was such a low-maintenance, natural woman - hair pulled back, no make-up - and seeing her all dolled up with bright blue eye-shadow, it seemed to be a totally different woman on screen. When, I look back on it now, I think it must have been quite hard for her - to say goodbye to it all - but I never felt it as a child.

"Mum loved being domestic and she was a very nurturing person: she used to come and teach at my school as a classroom helper and she did amazing parties. When I was six, I had a 'mermaid party' and Mum made fishtails for all the girls - and some of the boys - out of bubble wrap and sequins."

Occasionally, travelling with Sladen to Doctor Who conventions, Sadie would have glimpses of her mum's former life. "I was the lucky child who got put inside the Daleks and got to meet the Doctors," she recalls. "I liked Jon Pertwee a lot. Mum would put little frilly socks on me and Jon would point at them and tell me my knickers were falling down. I remember Tom Baker, too. I don't know if I've met Tom the man, though; it was always 'Tom the character: The last time I saw him, he and Mum were doing voiceovers for a Who DVD and he asked me if I'd like some money!"

SARAH JANE'S COMEBACK was, says Sadie, "a huge surprise" to her mother. "It was lovely that she just sort of fell back into her career. She didn't really have time to worry about it; she just enjoyed it. And I loved watching her in The Sarah Jane Adventures because there was so much of her in the role."

For the same reason, Sadie won't be watching the SJA "tribute series", which airs from this week. "I find it just a bit strange. I can't really watch it too soon. But I know I'll enjoy watching them again at some stage. And if I have children it will mean a lot to watch it with them. Mum would have been a wonderful grandma and I feel sad that she won't get to experience that."

It's a hard moment. But there is more than a hint of Sarah Jane Smith in Sadie's straightened shoulders and brave, blue gaze. "You just have to let grief roll, take its own time," she says. "Mum and I were so close and all my memories of her are happy ones. That gives me a lot of peace."

"This was our last 'girls holiday', taken two years ago in Majorca, before we knew Mum was ill. I really loved our times together, just talking, shopping, going out to eat. We were best friends"

"We both loved bathtime. Mum had this game where I'd be hiding under a towel, with my bottom in the air and Mum would whisk the towel away and say, 'Oh look! Someone's left me a Christmas turkey!' It made me laugh every single time"