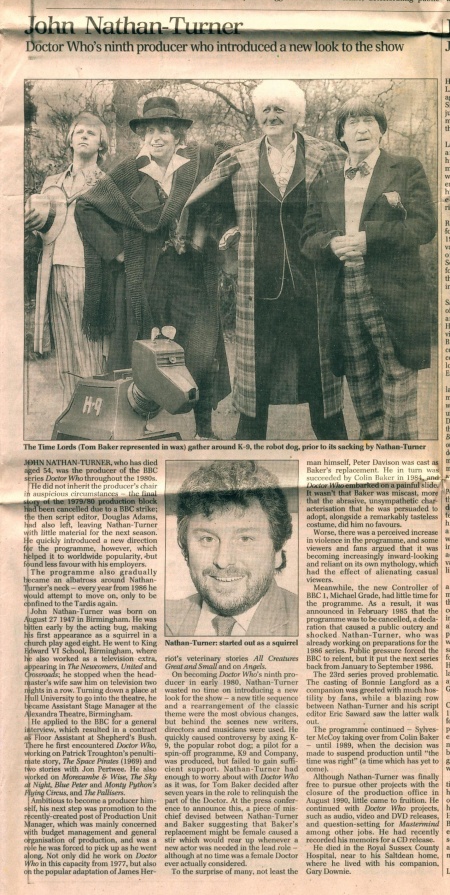 JOHN NATHAN-TURNER, who has died aged 54, was the producer of the BBC series Doctor Who throughout the 1980s.

He did not inherit the producer's chair in auspicious circumstances - the final story of the 1979/80 production block had been cancelled due to a BBC strike; the then script editor, Douglas Adams, had also left, leaving Nathan-Turner with little material for the next season. He quickly introduced a new direction for the programme, however, which helped it to worldwide popularity, but found less favour with his employers.

The programme also gradually became an albatross around Nathan-Turner's neck - every year from 1986 he would attempt to move on, only to be confined to the Tardis again.

John Nathan-Turner was born on August 27 1947 in Birmingham. He was bitten early by the acting bug, making his first appearance as a squirrel in a church play aged eight. He went to King Edward's School, Birmingham, where he also worked as a television extra, appearing in The Newcomers, United and Crossroads; he stopped when the headmaster's wife saw him on television two nights in a row. Turning down a place at Hull University to go into the theatre, he became Assistant Stage Manager at the Alexandra Theatre, Birmingham.

He applied to the BBC for a general interview, which resulted in a contract as Floor Assistant at Shepherd's Bush. There he first encountered Doctor Who, working on Patrick Troughton's penultimate story, The Space Pirates (1969) and two stories with Jon Pertwee. He also worked on Morecambe & Wise, The Sky at Night, Blue Peter and Monty Python's Flying Circus, and The Pallisers.

Ambitious to become a producer himself, his next step was promotion to the recently-created post of Production Unit Manager, which was mainly concerned with budget management and general organisation of production, and was a role he was forced to pick up as he went along. Not only did he work on Doctor Who in this capacity from 1977, but also on the popular adaptation of James Herriot's veterinary stories All Creatures Great and Small and on Angels.

On becoming Doctor Who's ninth producer in early 1980, Nathan-Turner wasted no time on introducing a new look for the show - a new title sequence and a rearrangement of the classic theme were the most obvious changes, but behind the scenes new writers, directors and musicians were used. He quickly caused controversy by axing K-9, the popular robot dog; a pilot for a spin-off programme, K9 and Company, was produced, but failed to gain sufficient support. Nathan-Turner had enough to worry about with Doctor Who as it was, for Tom Baker decided after seven years in the role to relinquish the part of the Doctor. At the press conference to announce this, a piece of mischief devised between Nathan-Turner and Baker suggesting that Baker's replacement might be female caused a stir which would rear up whenever a new actor was needed in the lead role - although at no time was a female Doctor ever actually considered.

To the surprise of many, not least the man himself, Peter Davison was cast as Baker's replacement. He in turn was succeeded by Colin Baker in 1984, and Doctor Who embarked on a painful slide. It wasn't that Baker was miscast, more that the abrasive, unsympathetic characterisation that he was persuaded to adopt, alongside a remarkably tasteless costume, did him no favours.

Worse, there was a perceived increase in violence in the programme, and some viewers and fans argued that it was becoming increasingly inward-looking and reliant on its own mythology, which had the effect of alienating casual viewers.

Meanwhile, the new Controller of BBC 1, Michael Grade, had little time for the programme. As a result, it was announced in February 1985 that the programme was to be cancelled, a declaration that caused a public outcry and shocked Nathan-Turner, who was already working on preparations for the 1986 series. Public pressure forced the BBC to relent, but it put the next series back from January to September 1986.

The 23rd series proved problematic. The casting of Bonnie Langford as a companion was greeted with much hostility by fans, while a blazing row between Nathan-Turner and his script editor Eric Saward saw the latter walk out.

The programme continued - Sylvester McCoy taking over from Colin Baker - until 1989, when the decision was made to suspend production until "the time was right" (a time which has yet to come).

Although Nathan-Turner was finally free to pursue other projects with the closure of the production office in August 1990, little came to fruition. He continued with Doctor Who projects, such as audio, video and DVD releases, and question-setting for Mastermind among other jobs. He had recently recorded his memoirs for a CD release.

He died in the Royal Sussex County Hospital, near to his Saltdean home, where he lived with his companion, Gary Downie.