Paint along with Patrick 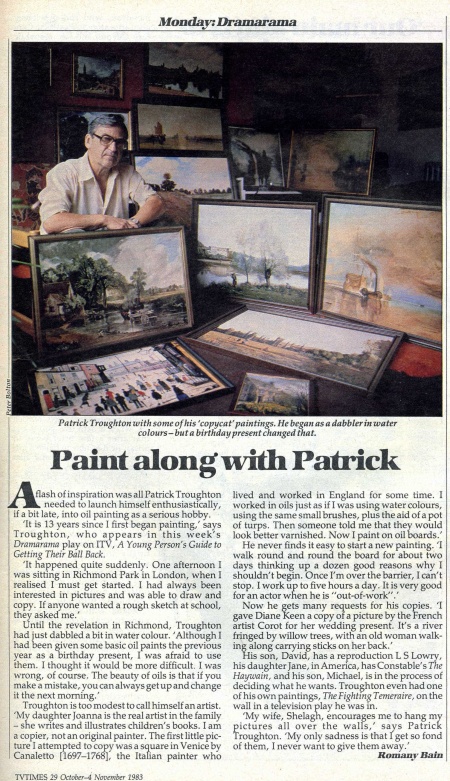 Patrick Troughton with some of his 'copycat' paintings. He began as a dabbler in water colours-but a birthday present changed that.

A flash of inspiration was all Patrick Troughton needed to launch himself enthusiastically, if a bit late, into oil painting as a serious hobby.

'It is 13 years since I first began painting,' says Troughton, who appears in this week's Dramarama play on ITV, A Young Person's Guide to Getting Their Ball Back.

'It happened quite suddenly. One afternoon I was sitting in Richmond Park in London, when I realised I must get started. I had always been interested in pictures and was able to draw and copy. If anyone wanted a rough sketch at school, they asked me.'

Until the revelation in Richmond, Troughton had just dabbled a bit in water colour. 'Although I had been given some basic oil paints the previous year as a birthday present, I was afraid to use them. I thought it would be more difficult. I was wrong, of course. The beauty of oils is that if you make a mistake, you can always getup and change it the next morning.'

Troughton is too modest to call himself an artist. 'My daughter Joanna is the real artist in the family - she writes and illustrates children's books. I am a copier, not an original painter. The first little picture I attempted to copy was a square in Venice by Canaletto [1697-1768], the Italian painter who lived and worked in England for some time. I worked in oils just as if I was using water colours, using the same small brushes, plus the aid of a pot of turps. Then someone told me that they would look better varnished. Now I paint on oil boards.'

He never finds it easy to start a new painting. 'I walk round and round the board for about two days thinking up a dozen good reasons why I shouldn't begin. Once I'm over the barrier, I can't stop. I work up to five hours a day. It is very good for an actor when he is "out-of-work".'

Now he gets many requests for his copies. 'I gave Diane Keen a copy of a picture by the French artist Corot for her wedding present. It's a river fringed by willow trees, with an old woman walking along carrying sticks on her back.'

His son, David, has a reproduction L S Lowry, his daughter Jane, in America, has Constable's The Haywain, and his son, Michael, is in the process of deciding what he wants. Troughton even had one of his own paintings, The Fighting Temeraire, on the wall in a television play he was in.

'My wife, Shelagh, encourages me to hang my pictures all over the walls,' says Patrick Troughton. 'My only sadness is that I get so fond of them, I never want to give them away.'