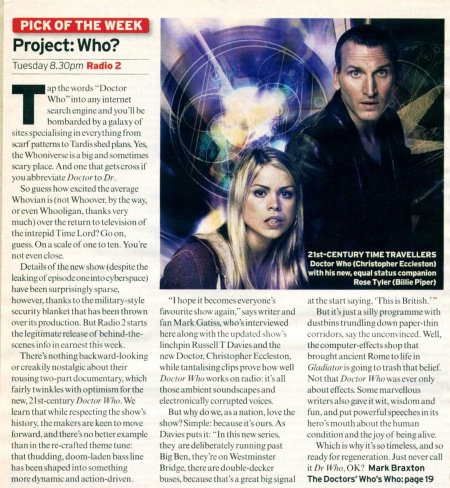 PICK OF THE WEEK

ap the words "Doctor Who" into any internet search engine and you'll be bombarded by a galaxy of sites specialising in everything from scarf patterns to Tardis shed plans. Yes, the Whoniverse is a big and sometimes scary place. And one that gets cross if you abbreviate Doctor to Dr.

So guess how excited the average Whovian is (not Whoover, by the way, or even Whooligan, thanks very much) over the return to television of the intrepid Time Lord? Go on, guess. On a scale of one to ten. You're not even close.

Details of the new show (despite the leaking of episode one into cyberspace) have been surprisingly sparse, however, thanks to the military-style security blanket that has been thrown over its production. But Radio 2 starts the legitimate release of behind-the-scenes info in earnest this week.

There's nothing backward-looking or creakily nostalgic about their rousing two-part documentary, which fairly twinkles with optimism for the new, 21st-century Doctor Who. We learn that while respecting the show's history, the makers are keen to move forward, and there's no better example than in the re-crafted theme tune: that thudding, doom-laden bass line has been shaped into something more dynamic and action-driven.

"I hope it becomes everyone's favourite show again," says writer and fan Mark Gauss, who's interviewed here along with the updated show's linchpin Russell T Davies and the new Doctor, Christopher Eccleston, while tantalising clips prove how well Doctor Who works on radio: it's all those ambient soundscapes and electronically corrupted voices.

But why do we, as a nation, love the show? Simple: because it's ours. As Davies puts it: "In this new series, they are deliberately running past Big Ben, they're on Westminster Bridge, there are double-decker buses, because that's a great big signal at the start saying, 'This is British.'"

But it's just a silly programme with dustbins trundling down paper-thin corridors, say the unconvinced. Well, the computer-effects shop that brought ancient Rome to life in Gladiator is going to trash that belief. Not that Doctor Who was ever only about effects. Some marvellous writers also gave it wit, wisdom and fun, and put powerful speeches in its hero's mouth about the human condition and the joy of being alive.

Which is why it's so timeless, and so ready for regeneration. Just never call it Dr Who, OK? The Doctors' Who's Who: page 19