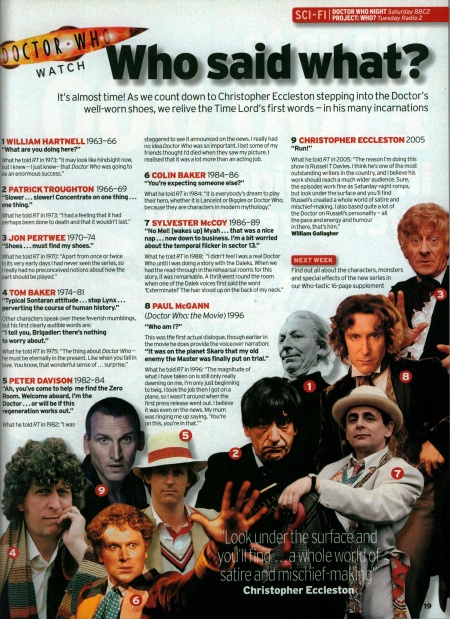 It's almost time! As we count down to Christopher Eccleston stepping into the Doctor's well-worn shoes, we relive the Time Lord's first words — in his many incarnations

"What are you doing here?"

What he told RT in 1973: "It may look like hindsight now, but I knew — I just knew— that Doctor Who was going to be an enormous success."

What he told RT in 1973: "1 had a feeling that it had perhaps been done to death and that it wouldn't last."

What he told RT in 1970: "Apart from once or twice in its very early days I had never seen the series, so I really had no preconceived notions about how the part should be played."

Other characters speak over these feverish mumblings, but his first clearly audible words are:

"I tell you, Brigadier: there's nothing to worry about."

What he told RT in 1975: The thing about Doctor Who — he must be eternally in the present. Like when you fall in love. You know, that wonderful sense of ... surprise."

"Ah, you've come to help me find the Zero Room. Welcome aboard, I'm the Doctor... or will be if this regeneration works out."

What he told RT in 1982: "I was staggered to see it announced on the news. I really had no idea Doctor Who was so important. I bet some of my friends thought I'd died when they saw my picture. I realised that it was a lot more than an acting job.

"You're expecting someone else?"

What he told RT in 1984: It is everybody's dream to play their hero, whether it is Lancelot or Biggles or Doctor Who, because they are characters in modern mythology."

What he told RT in 1988: "I didn't feel I was a real Doctor Who until I was doing a story with the Daleks. When we had the read-through in the rehearsal rooms for this story, it was remarkable. A thrill went round the room when one of the Dalek voices first said the word 'Exterminate!' The hair stood up on the back of my neck."

This was the first actual dialogue, though earlier in the movie he does provide the voiceover narration: "It was on the planet Skaro that my old enemy the Master was finally put on trial."

What he told RT in 1996: "The magnitude of what I have taken on is still only really dawning on me, I'm only just beginning to twig. I took the job then I got on a plane, so I wasn't around when the first press release went out. I believe it was even on the news. My mum was ringing me up saying, 'You're on this, you're in that"

What he told RT in 2005: "The reason I'm doing this show is Russell T Davies. I think he's one of the most outstanding writers in the country, and I believe his work should reach a much wider audience. Sure, the episodes work fine as Saturday-night romps, but look under the surface and you'll find

Russell's created a whole world of satire and mischief-making. I also based quite a lot of the Doctor on Russell's personality — all the pace and energy and humour in there, that's him."