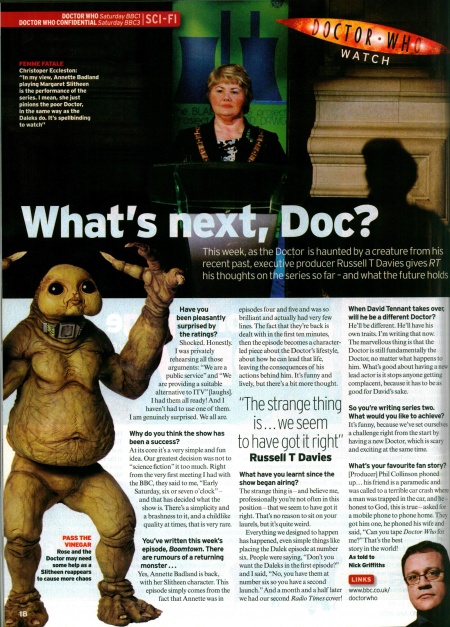 Christoper Eccleston: "In my view, Annette Badland playing Margaret Slitheen is the performance of the series. I mean, she just pinions the poor Doctor, in the same way as the Daleks do. It's spellbinding to watch"

This week, as the Doctor is haunted by a creature from his recent past, executive producer Russell T Davies gives RT his thoughts on the series so far - and what the future holds

Have you been pleasantly surprised by the ratings?

Shocked. Honestly. I was privately rehearsing all those arguments: "We are a public service" and "We are providing a suitable alternative to ITV" [laughs]. I had them all ready! And I haven't had to use one of them. I am genuinely surprised. We all are.

Why do you think the show has been a success?

At its core it's a very simple and fun idea. Our greatest decision was not to "science fiction" it too much. Right from the very first meeting I had with the BBC, they said to me, "Early Saturday, six or seven o'clock"-and that has decided what the show is There's a simplicity and a brashness to it, and a childlike quality at times, that is very rare.

You've written this week's episode, Boomtown. There are rumours of a returning monster...

Yes, Annette Badland is back, with her Slitheen character. This episode simply comes from the fact that Annette was in episodes four and five and was so brilliant and actually had very few lines. The fact that they're back is dealt with in the first ten minutes, then the episode becomes a character-led piece about the Doctor's lifestyle, about how he can lead that life, leaving the consequences of his actions behind him. It's funny and lively, but there's a bit more thought.

What have you learnt since the show began airing?

The strange thing is - and believe me, professionally you're not often in this position - that we seem to have got it right. That's no reason to sit on your laurels, but it's quite weird.

Everything we designed to happen has happened, even simple things like placing the Dalek episode at number six. People were saying, "Don't you want the Daleks in the first episode?" and I said, "No, you have them at number six so you have a second launch." And a month and a half later we had our second Radio Times cover!

When David Tennant takes over, will he be a different Doctor?

He'll be different. He'll have his own traits. I'm writing that now. The marvellous thing is that the Doctor is still fundamentally the Doctor, no matter what happens to him. What's good about having a new lead actor is it stops anyone getting complacent, because it has to be as good for David's sake.

So you're writing series two. What would you like to achieve?

It's funny, because we've set ourselves a challenge right from the start by having a new Doctor, which is scary and exciting at the same time.

[Producer] Phil Collinson phoned up... his friend is a paramedic and was called to a terrible car crash where a man was trapped in the car, and he - honest to God, this is true - asked for a mobile phone to phone home. They got him one, he phoned his wife and said, "Can you tape Doctor Who for me?" That's the best story in the world!