The stars are coming out 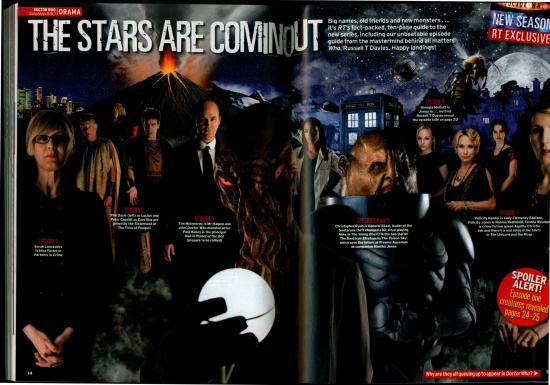 THE STARS ARE COMING OUT

Big names, old friends and new monsters ... it's RT's fact-packed, ten-page guide to the new series, including our unbeatable episode guide from the mastermind behind all matters Who, Russell T Davies. Happy landings!

Sarah Lancashire is Miss Foster in Partners in Crime

Christopher Ryan is General Staal, leader of the Sontarans (he's changed a bit since playing Mike in The Young Ones!) in the two-parter The Sontaran Stratagem/The Poison Sky, which sees the return of Freema Agyeman as companion Martha Jones

Episode 7 Felicity Kendal is Lady Clemency Eddison, Felicity Jones is Robina Redmond, Fenella Woolgar is crime fiction queen Agatha Christie (oh and there's a real sting in the tale!) in The Unicorn and the Wasp

Why are they all queuing up to appear in Doctor Who?