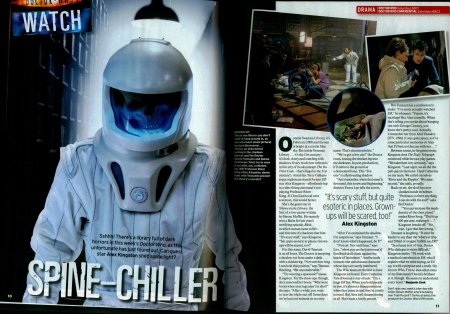 Sshh! There's a library full of dark horrors in this week's Doctor Who, as this unfortunate has just found out. Can guest star Alex Kingston shed some light?

Outside Swansea Library, it's February 2008 and the sun is bright in a crystal blue sky. But inside Swansea Library ... it's the 51st century; it's dark, dusty and crawling with shadows. Every book ever written is in this city of books (except The Da Vinci Code— that's illegal in the 51st century!). Amid this Terry Gilliamesque nightmare stands former ER star Alex Kingston - effortlessly hip in a slim-fitting astronaut's suit — playing Professor River Song. If Clint Eastwood were a woman, this would be her.

She's the guest star in Silence in the Library, the first of a two-parter written by Steven Moffat. He recently won a Bafta for last year's terrifying episode, Blink, in which statues came to life — and this time it's shadows that bite. "It's scary stuff," says Kingston, "but quite esoteric in places. Grownups will be scared, too!"

For this scene, David Tennant is on all fours. The Doctor is tempting a shadow out from under a desk .. . with a chicken leg. "Not sure how long I can hold this position," says Tennant, flinching. 'Bit uncomfortable."

"Try wearing a spacesuit!" teases Kingston. For the close-ups, though, she's removed her boots. "Why wear boots when your legs aren't in shot?" she says. "After a while, you want to tear the whole suit off Some days we've had our helmets on in every scene. That's claustrophobic."

"We've got a live one!" the Doctor roars, tossing the chicken leg into the darkness. In post-production, it'll rattle to the ground as a desiccated bone. This "live one" is a flesh-eating shadow.

"Just remember, when that meat is devoured, this is new and frightening," director Euros Lyn tells the actors.

"After I've examined the shadow, I'm suspicious," says Tennant. "I don't know what's happened, do I?"

"Not yet. Not until later," says Lyn, "when you see the [astronaut's] fossilised skull clunk against the inside of his helmet." And he nods towards one unfortunate character whose days are surely numbered.

The Who team are thrilled to have Kingston on board. Even Catherine Tate (Donna) is star-struck: "I'm a huge ER fan. When you hold people in awe, it's almost a disappointment when they come in and they're utterly normal. But Alex isn't disappointing at all. She's such a lovely person."

But Tennant has a confession to make: "I've never actually watched ER," he whispers. "I know, it's sacrilege! But Alex is terrific. When she's telling you stories about hanging out with George Clooney, you know she's pretty cool. Actually, I remember her from Moll Flanders [ITV, 1996]. It was quite saucy, so I've some particular memories of Alex that I'd best not discuss with her ..."

Between scenes, in the green room, Kingston does The Daily Telegraph crossword while the cast play games. "We take them very seriously," says Kingston. "Last night, we all did the pub quiz in the hotel. I had Catherine on my team. We called ourselves 'River and the Ripples'. We came second," she adds, proudly.

Back on set, the skull has now clunked inside its helmet. "Professor, is there anything I can do with the suit?" asks the Doctor.

"You can increase the mesh-density of the chest panel," replies River Song. "Dial it up 400 per cent, making it ..." Kingston breaks off: "No, wait. I got that line wrong."

Tennant is laughing. "It can't be harder to say than the 'what's-it drip and 200m1 of oxygen' babble on ER!"

"In a funny sort of way, Doctor Who dialogue is more difficult," Kingston smiles. "I'd work with a medical consultant on ER, who'd explain what we were saying, so I'd say it with a purpose and a truth. On Doctor Who, I've no idea what some of my lines mean! David is brilliant at it, though. He seems to understand every word."

Don't miss next week's interview with writer Steven Moffat, who'll be taking over from Russell T Davies as executive producer for Doctor Who's fifth series.

This is one library you don't want to hang around in, as one astronaut (main picture) has just discovered ... There's an alien horror lurking in the shadows (above) and the Doctor (David Tennant) and Donna (Catherine Tate) try to coax it out with, urn, a chicken leg. Will Professor River Song (Alex Kingston, above right with Tennant) uncover the library's secrets?