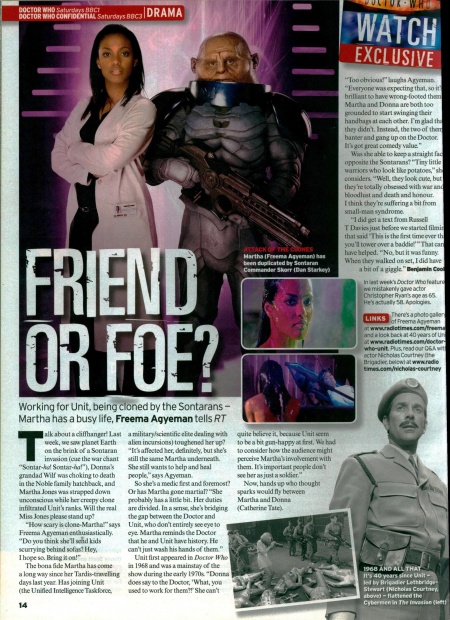 Working for Unit, being cloned by the Sontarans — Martha has a busy life, Freema Agyeman tells RT

Talk about a cliffhanger! Last week, we saw planet Earth on the brink of a Sontaran invasion (cue the war chant "Sontar-ha! Sontar-ha!"), Donna's grandad Wilf was choking to death in the Noble family hatchback, and Martha Jones was strapped down unconscious while her creepy clone infiltrated Unit's ranks. Will the real Miss Jones please stand up?

"How scary is clone-Martha!" says Freema Agyeman enthusiastically. "Do you think she'll send kids scurrying behind sofas? Hey, I hope so. Bring it on!"

The bona fide Martha has come a long way since her Tardis-travelling days last year. Has joining Unit (the Unified Intelligence Taskforce, a military/scientific elite dealing with alien incursions) toughened her up? "It's affected her, definitely, but she's still the same Martha underneath. She still wants to help and heal people," says Agyeman.

So she's a medic first and foremost? Or has Martha gone martial? "She probably has a little bit. Her duties are divided. In a sense, she's bridging the gap between the Doctor and Unit, who don't entirely see eye to eye. Martha reminds the Doctor that he and Unit have history. He can't just wash his hands of them."

Unit first appeared in Doctor Who in 1968 and was a mainstay of the show during the early 1970s. "Donna does say to the Doctor, 'What, you used to work for them?!' She can't quite believe it, because Unit seem to be a bit gun-happy at first. We had to consider how the audience might perceive Martha's involvement with them. It's important people don't see her as just a soldier."

Now, hands up who thought sparks would fly between Martha and Donna (Catherine Tate)."Too obvious!" laughs Agyeman. "Everyone was expecting that, so it brilliant to have wrong-footed them Martha and Donna are both too grounded to start swinging their handbags at each other. I'm glad that they didn't. Instead, the two of the banter and gang up on the Doctor. It's got great comedy value."

Was she able to keep a straight face opposite the Sontarans? "Tiny little warriors who look like potatoes," she considers. "Well, they look cute, but they're totally obsessed with war an bloodlust and death and honour. I think they're suffering a bit from small-man syndrome.

"I did get a text from Russell T Davies just before we started that said 'This is the first time ever that you'll tower over a baddie!" That ca have helped. "No, but it was funny. When they walked on set, I did have a bit of a giggle."

There's a photo gallery of Freema Agyeman at www.radiotimes.com/freem and a look back at 40 years of Un at www.radlotimes.com/doctor who-unit. Plus, read our 0&A wit actor Nicholas Courtney (the Brigadier, below) at www.radio times.com/nicholas-courtney

It's 40 years since Unit — led by Brigadier Lethbridge-Stewart (Nicholas Courtney, above) — flattened the Cybermen in The Invasion (left)