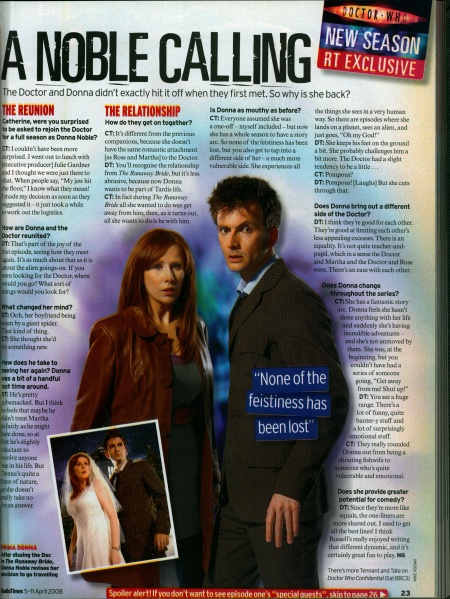 The Doctor and Donna didn't exactly hit it off when they first met. So why is she back?

Catherine, were you surprised be asked to rejoin the Doctor a full season as Donna Noble?

I couldn't have been more surprised. I went out to lunch with [executive producer] Julie Gardner and I thought we were just there to chat. When people say, "My jaw hit the floor," I know what they mean! I made my decision as soon as they suggested it - it just took a while work out the logistics.

How are Donna and the Doctor reunited?

DT: That's part of the joy of the the episode, seeing how they meet again. It's as much about that as it is about the alien goings-on. If you were looking for the Doctor, where would you go? What sort of things would you look for?

What changed her mind?

DT: Ooh, her boyfriend being eaten by a giant spider. That kind of thing.

How does he take to seeing her again? Donna was a bit of a handful last time around.

DT: He's pretty gobsmacked. But I think he feels that maybe he didn't treat Martha fairly as he might have done, so at first he's slightly reluctant to involve anyone else in his life. But Donna's quite a force of nature, so she doesn't really take no for an answer.

How do they get on together?

CT: It's different from the previous companions, because she doesn't have the same romantic attachment [as Rose and Martha] to the Doctor.

DT: You'll recognise the relationship from The Runaway Bride, but it's less abrasive, because now Donna wants to be part of Tardis life.

CT: In fact during The Runaway Bride all she wanted to do was get away from him; then, as it turns out, all she wants to do is be with him.

Is Donna as mouthy as before?

CT: Everyone assumed she was a one-off - myself included - but now she has a whole season to have a story arc. So none of the feistiness has been lost, but you also get to tap into a different side of her - a much more vulnerable side. She experiences all

the things she sees in a very human way. So there are episodes where she lands on a planet, sees an alien, and just goes, "Oh my God!"

DT: She keeps his feet on the ground a bit. She probably challenges him a bit more. The Doctor had a slight tendency to be a little .. .

DT: Pompous! [Laughs] But she cuts through that.

Does Donna bring out a different side of the Doctor?

Does Donna change throughout the series?

CT: She has a fantastic story c. Donna feels she hasn't done anything with her life and suddenly she's having incredible adventures - and she's not unmoved by them. She was, at the beginning, but you couldn't have had a series of someone going, "Get away from me! Shut up!"

DT: You see a huge range. There's a lot of funny, quite banter-y stuff and a lot of surprisingly emotional stuff.

CT: They really rounded Donna out from being a g fishwife to ne who's quite vulnerable and emotional.

Does she provide greater potential for comedy?

DT: Since they're more like equals, the one-liners are more shared out. I used to get the best lines! I think Russell's really enjoyed writing hat different dynamic, and it's certainly great fun to play.

After dissing the Doc in The Runaway Bride, Donna Noble revises her decision to go travelling