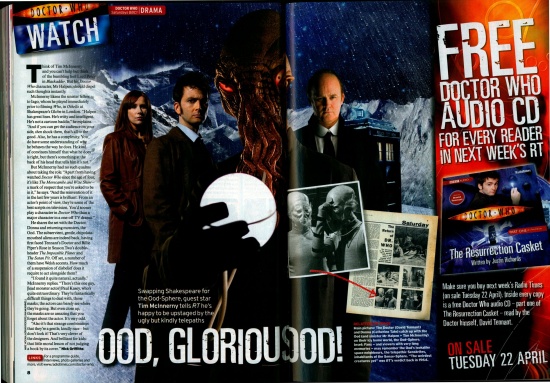 Think of Tim McInnerny and you can't help but think of the bumbling fool Lord Percy in Blackadder. But his Doctor Who character, Mr Halpen, should dispel such thoughts instantly.

McInnerny likens the sinister fellow to lago, whom he played immediately prior to filming Who, in Othello at Shakespeare's Globe in London. "Halpen has great lines. He's witty and intelligent. He's not a cartoon baddie," he explains. "And if you can get the audience on your side, then shock them, that's all to the good. Also, he has a complexity. You do have some understanding of why he behaves the way he does. He kind of convinces himself that what he does is right, but there's something at the back of his head that tells him it's not."

But McInnerny had no such qualms about taking the role. "Apart from having watched Doctor Who since the age of four, it's like The Morecambe and Wise Show a mark of respect that you're asked to be in it," he says. "And the reinvention of it in the last few years is brilliant. From an actor's point of view, they're some of the best scripts on television. You'd sooner play a character in Doctor Who than a major character in a one-off TV drama."

He shares the set with the Doctor, Donna and returning monsters, the Ood. The subservient, gentle, chipolata-mouthed aliens are indeed back, having first faced Tennant's Doctor and Billie Piper's Rose in Season Two's doubleheader The Impossible Planet and The Satan Pit. Off set, a number of them have Welsh accents. How much of a suspension of disbelief does it require to act alongside them?

"I found it quite natural, actually," McInnerny replies. "There's this one guy, [lead monster actor] Paul Kasey, who's quite extraordinary. They're fantastically difficult things to deal with, those z masks; the actors can barely see where they're going. But even close up, the masks are so amazing that you w forget about the actor. It's very odd.

"Also it's that strange combination that they're a gentle, kindly race — but don't look it! That's very clever of the designers. And brilliant for kids: w that little moral lesson of not judging book by its cover."

Swapping Shakespeare for the Ood-Sphere, guest star Tim McInnerny tells RT he's happy to be upstaged by the ugly but kindly telepaths

Main picture: The Doctor (David Tennant) and Donna (Catherine Tate) catch up with the Ood (and sinister Mr Halpen — Tim McInnerny) on their icy home world, the Ood-Sphere. Inset: Fans — and viewers with very long memories — may remember the Ood's lookalike space neighbours, the telepathic Sensorites, inhabitants of the Sense-Sphere. "The weirdest creatures yet" was RT's verdict back in 1964.